The Rare Earths Monthly Metals Index (MMI) picked up one point, rising to a value of 19.
Need buying strategies for steel in 2019? MetalMiner’s Annual Outlook has what you need 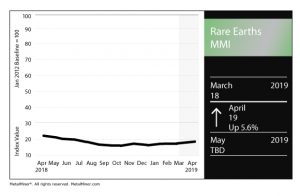 Australian rare-earths miner Lynas Corp., as we’ve noted in previous Rare Earths MMI reports, has been facing regulatory pressure in Malaysia of late.
The Malaysian government has issued two conditions for renewal of the miner’s license in the country, which expires in September, related to disposal of two types of waste. Last month, Lynas appealed one of the conditions put forth by the government related to disposal of water leached purification residue.
As such, the miner is considering building out initial ore processing near its Australian mine, Reuters reported.
“We have been giving great consideration to … our future industrial footprint,” CEO Amanda Lacaze was quoted as saying during an analyst and investor call. “We remain confident that we can agree a path forward with the Malaysian government which is good for Malaysia and good for our business.”
Lynas is the biggest miner of rare earths outside of China.
“We see value in operating alternative cracking and leaching processing close to our resource, and therefore the primary locations that we have been considering for growth are in Western Australia,” the miner said in a statement posted to its website. “Part of this planning has been to scope our future industrial footprint. Our preference has always been to add to our Malaysian capability, not replace it. Our Malaysian cracking and leaching operations are performing very well as a result of the IP our Malaysian team has developed and owned – IP which others cannot use – and the hard work of all the Lynas team. We remain committed to supporting the Malaysian economy and protecting our people’s jobs. However, this same work means we are well placed to deal with any change in Malaysian government policy.”
The company received a shock last Friday following comments by Malaysian Prime Minister Mahathir Mohamad, who indicated the miner’s Malaysian operations were being put up for buyers who can make good on cleanup of the radioactive waste.
“With regard to Lynas, we have imposed an extra condition, that is they must take away the waste,” Mohamad said. “But they want to take away the waste to where? They want to take it to Australia, but Australia doesn’t want to accept it, so they can’t do it anyway.
“So what we have done is we have opened up the business to other people, and there are other companies willing to buy up or somehow or other acquire Lynas, they have given us a promise that in future before sending the raw material to Malaysia they will clean it up first, they will crack it and decontaminate it in some way with regard to radioactivity, so that when the raw material comes here, the volume is less and the waste from that raw material is not dangerous to anybody.”
The comments came just over a week after Lynas rejected a $1.5 billion takeover bid from Australian conglomerate Wesfarmers.
Meanwhile, in perhaps promising news for Lynas, the Sydney Morning Herald reported the government of Western Australia has indicated it would consider offering assistance if the company should decide to build a new processing plant in the state.