The Rare Earths Monthly Metals Index (MMI) held flat this month, holding for a reading of 18. 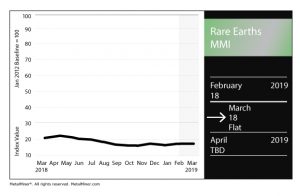 According to mining.com, auditors have flagged a material risk for Australian miner Lynas Corp’s Malaysian operations.

The rare earths miner, one of the biggest outside of China, has been navigating new regulatory standards imposed by the Malaysian government.

“As noted in the report for the quarter ending 31 December 2018, during the half year the Malaysian government appointed a Review Committee to evaluate Lynas Malaysia’s operations,” the miner noted in its quarterly earnings announcement. “The Review Committee’s report was released on 4 December 2018 and found Lynas Malaysia’s operations are low risk and Lynas Malaysia is compliant with applicable laws. Separately, on 4 December 2018, the Atomic Energy Licensing Board (AELB) issued a letter containing two new pre-conditions for Lynas’ licence renewal on 2 September 2019. These conditions relate to the management of the 2 residues produced by Lynas operations in Malaysia.”

According to the release, Lynas has appealed one of the conditions concerning the disposal of water leached purification (WLP) residue, one of the residues cited by the Malaysian government.

The miner’s license to operate in the country is up for renewal in September.

“The regulatory environment in Malaysia was very challenging through the half year, Lynas CEO and Managing Director Amanda Lacaze said in the release. “Despite this, we remained focused on business fundamentals, meeting the needs of our key customers and laying the foundations for further growth in our business.”

According to a report by Forbes, researchers may have found a greener way to extract rare earths, which are coveted for a number of high-tech applications, including ever-more-sophisticated smartphones.

As the article by Dr. Anna Powers notes, mining rare earths is a difficult business — even where deposits exist, they may not be economically viable. In addition, the mining of rare earths elements poses negative environmental impacts.

However, as Powers explained, scientists may have found a more environmentally friendly method by which to extract rare earths elements: bio-acids.

“Scientists used synthetic phosphogypsum which was produced in lab and had a controlled composition, and used various acids to understand which acid was best at separating rare-earths most efficiently,” she explained. “Surprisingly, bio-acids did the best job! The next step of this research would be to apply industrial grade phosphogypsum found as a by product to refine the results of this study as well as understand how different compositions of phosphogypsum affects the ability of rare-earth metals to be extracted.”

PREVIOUS POST:
Global Precious MMI: Palladium Prices Singlehandedly Heating Up a Frigid Winter
NEXT POST:
This Morning in Metals: China’s Exports Down More than 20% in February