The Rare Earths Monthly Metals Index (MMI) held flat this month for a May value of 19.
Need buying strategies for steel? Request your two-month free trial of MetalMiner’s Outlook 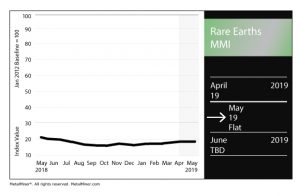 As we’ve noted in previous installments of the Rare Earths MMI, Australian rare earths miner Lynas Corp. continues to deal with regulatory challenges at its Malaysia operations.
Lynas, the largest miner of rare earths outside of China, is facing two conditions from the Malaysian government regarding the renewal of its license to operate in the country (which expires in September 2019).
The conditions from the Malaysian government related to disposal of two forms of industrial waste.
“We also continue to engage in ongoing discussions with the government to seek to resolve the remaining issues related to the pre-conditions for Lynas’ licence renewal, as detailed further below,” the company said in its Q1 earnings report. “We have restated our commitment to Malaysia, to being a valuable contributor to the economy and to playing a vital role in supporting the development of Malaysia’s 4.0 Industries.”
Tensions have picked up after comments from Malaysian Prime Minister Mahathir Mohamad last month.
“So what we have done is we have opened up the business to other people, and there are other companies willing to buy up or somehow or other acquire Lynas, they have given us a promise that in future before sending the raw material to Malaysia they will clean it up first, they will crack it and decontaminate it in some way with regard to radioactivity, so that when the raw material comes here, the volume is less and the waste from that raw material is not dangerous to anybody,” the prime minister said.
Lynas said it had reached out to the Malaysian government for clarification regarding the prime minister’s comments.
Meanwhile, last month two groups of protestors, representing Malaysian environmental groups and Lynas workers, raised their voices on the issue.
According to a Reuters report, members from each group provided statements to government representatives, with the group representing environmental interests calling for the suspension of Lynas’ license, while Lynas workers touted the plant’s role as a source of jobs.