The Renewables Monthly Metals Index (MMI) fell two points this month for a May MMI reading of 101. 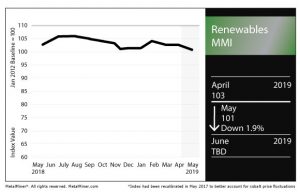 As the world moves toward sourcing a larger and larger share of its total energy needs from renewables, the environmental impact of mining for metals needed for renewable energy has come into focus.

In that vein, on May 1 the World Bank announced the launch of a Climate-Smart Mining Facility, dubbed as the “first-ever fund dedicated to making mining for minerals climate-smart and sustainable.”

“The Facility will support the sustainable extraction and processing of minerals and metals used in clean energy technologies, such as wind, solar power, and batteries for energy storage and electric vehicles,” the World Bank said in a release. “It focuses on helping resource-rich developing countries benefit from the increasing demand for minerals and metals, while ensuring the mining sector is managed in a way that minimizes the environmental and climate footprint.”

According to the release, the World Bank is targeting an investment of $50 million over five years toward the goals of sustainable mining.

The new Climate-Smart Mining Facility is inspired by a World Bank reported released in 2017, titled “The Growing Role of Minerals and Metals for a Low-Carbon Future,” which examines the role of mining in a future of low- or zero-carbon energy sources (the full 2017 report is available here). For example, demand for lithium, graphite and nickel is expected to skyrocket in the coming years (by 965%, 383% and 108%, respectively, by 2050).

“While the growing demand for minerals and metals offers an opportunity for mineral-rich developing countries, it also represents a challenge: without climate-smart mining practices, the negative impacts from mining activities will increase, affecting vulnerable communities and environment,” the World Bank said.

Rio Tinto was among the miners to express support for the initiative.

“The transition to clean energy solutions presents both a significant opportunity and responsibility for the mining industry, as it provides the materials that make these technologies possible,” Rio Tinto CEO Jean-Sebastien Jacques said.

“We want to be part of the solution on climate change and the best solutions will come from innovative partnerships across competitors, governments and institutions. Our collaboration with the World Bank and many others is aimed at making a real difference by promoting sustainable practices across our industry. We look forward to supporting the Climate-Smart Mining Facility by contributing not just funding but also expertise as a leader in sustainable mining practices.”

However, elevated levels of uranium found in cobalt mined at its Katanga operation in the Democratic Republic of the Congo resulted in no cobalt sales from the mine in Q1.

“From April 2019, the export and sale of a limited quantity of cobalt, complying with appropriate regulations, was allowed to resume,” the company said in its production announcement. “Such resumption of exports remains subject to the relevant DRC export procedures, which include continued monitoring by the relevant authorities.”

The GOES MMI, MetalMiner’s subindex tracking grain-oriented electrical steel, fell one point this month for a May MMI value of 175. 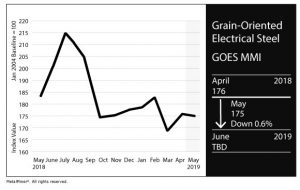 In other news, German firm Thyssenkrupp’s proposed joint venture with Tata Steel does not appear likely to receive European Commission approval (Thyssenkrupp is a GOES producer).

In September 2018, the two companies announced plans to merge their European operations, forming what would become Europe’s second-largest steelmaking entity.

In October 2018, the European Commission launched an investigation, citing concerns that the merger might lead to higher prices and fewer choices for consumers in the European market.

On Friday, Tata Steel released a statement indicating approval of the JV is unlikely.

“Based on the Statement of Objections published by the Commission, a comprehensive package of remedies was offered covering all the areas of concern highlighted by the Commission,” the firm said. “The remedies offered were developed considering the overall industrial strategy for the proposed joint venture, the integrated and complex nature of the supply chain to service customers and the need to build a sustainable business which would be able to endure the structural challenges faced by the European steel industry. However, the feedback from the Commission based on the market test it has undertaken suggests that it is unlikely to clear the proposal in spite of the significant remedies offered.”