The Raw Steel Monthly Metals Index (MMI) dropped 1.2% this month, down to an index reading of 80.
Weakness in the index once again came from U.S. domestic steel prices.
Need buying strategies for steel? Request your two-month free trial of MetalMiner’s Outlook 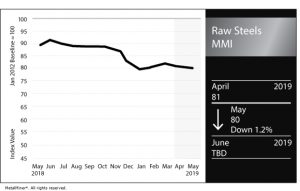 
This brings prices back down to around February levels, when these four forms of steel initially turned around from recent price declines (after reaching historical highs in April 2018).

The spread between U.S. HRC and Chinese HRC narrowed between March and April, dropping to $161/st from $183/st in March.
Based on preliminary May numbers, the gap looks poised to close further, with a preliminary drop to $120/st based on early May prices.


Compared to HRC, the spread between CRC prices remains relatively flat, with a drop of just a few dollars between March and April. However, the gap looks to narrow more significantly based on early May prices, with a gap of $223/st (down from April’s $240/st price difference).

Construction and housing showed some weakness recently, according to the most recently available U.S. Census Bureau figures.
Total construction spending for March dropped below February by 0.9%, totaling around $1,228 billion. Additionally, the sector looks flat since last year, with this March’s figure coming in below last March, when expenditures on construction totaled $1,293 billion, marking a 0.8% drop.
Q1 expenditures look essentially flat compared with last year, with a 0.2% increase.
The durable goods sector has showed strength, with new orders up for four of the previous five months through March, according to the U.S. Census Bureau, with orders for transportation equipment growing the most.
Reuters reported lower auto sales for April, with the sales decline attributed to rising prices and fewer incentives offered, especially on lower-end models.
In addition, consumers turned to the used market in larger numbers this year due to higher prices, as costs of new vehicles increased this year.

U.S. HRC futures spot and 3-month prices both declined this month, in excess of 5%, both at $654/st.
Korea’s scrap steel price, currently at $150/mt, dropped significantly after a similarly sizable increase last month, with both the increase and subsequent drop in excess of 16%.
Chinese prices showed some strength, although not across the board. Most notably, Chinese HRC prices increased by 5% to around $600/mt, while steel billet increased over 3% to $551/mt.