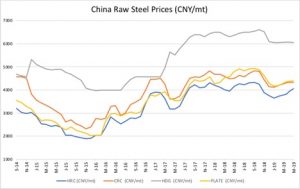 Looking more closely at HRC — along with CRC, HDG and plate — prices generally remain lower than a year ago on a year-on-year basis, with the exception of HRC due to the recent price increases. However, they all are generally hovering at similar prices levels, with HDG showing the biggest change. 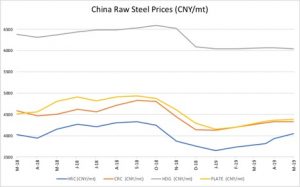 The spread between U.S. HRC and China HRC rests at $122/st, the lowest level since February 2018. However, recently the yuan weakened against the dollar, which will effectively increase the spread once more. A weaker yuan means Chinese prices will be cheaper.

China’s Caixin Manufacturing PMI reading decreased unexpectedly for April, dropping to 50.2 from March’s eight-month high of 50.8. With the forecast value at 51.0, the drop surprised the market. Weakness came from decreased output and orders. Additionally, export sales dropped for a second straight month due to weaker overseas demand.

The FXI, an index of China’s large-cap companies, also showed flat growth recently after increasing since the start of the year. 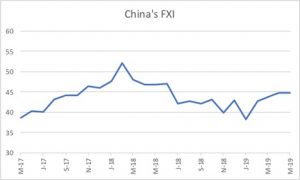 According to the association, fixed asset investment in the sector increased by 30.6% during Q1 2019. Some of the capacity increase harks back to less environmentally friendly induction furnace production, as companies looking to boost output turned to cheaper production methods. The industry organization came out in a public statement advocating that companies refrain from illicit capacity increases.

According to a recent Reuters report, the organization warned against structural issues in the industry as demand weakens. In addition, profitability suffered due to rising iron ore prices.

China’s automotive sales declined by 11.3% during the first quarter compared with the same period of 2018, according to the China Association of Automobile Manufacturers (CAAM).