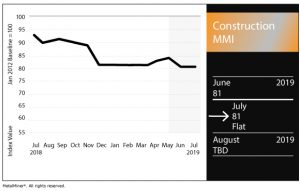 After a decline in March billings, billings grew for the second straight month in May, according to the American Institute of Architects’ (AIA) monthly Architecture Billings Index (ABI).
The May ABI checked in at 50.2 after recording a value of 50.5 in April; any value greater than 50 indicates billings growth.
Billings grew in the Midwest (51.6) and the South (51.4) regions, held flat in the West (50.0), and fell in the Northeast (47.6).
Despite the technical increase as reflected by the ABI, the past four months have showcased a slowdown not seen in seven years, according to the AIA.
“In fact, for the last four consecutive months, firm billings have either decreased or been flat, the longest period of that level of sustained softness since 2012,” the AIA said in its ABI release. “In addition, while both inquiries into new projects and the value of new design contracts remained positive, they both softened in May as well, another sign that the amount of pending work in the pipeline at firms may be starting to shrink.”

Last month, we reported U.S. housing starts, at a seasonally adjusted rate of 1.29 million, fell 0.9% in May compared with the previous month.
In addition, the National Association of Realtors (NAR) reported April pending home sales dropped 1.5% over the previous month. NAR’s Pending Homes Sales Index, which is based on contract signings, fell 2.0% in April, marking the 16th consecutive month of decline for the index.