The Automotive Monthly Metals Index (MMI) picked up one point this month, rising for a reading of 87. 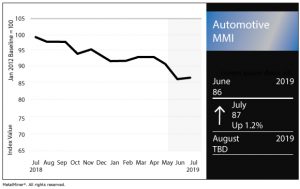 GM’s chief economist said U.S. light-vehicle SAAR for the first half of the year is expected to reach 17.0 million units.

“The U.S. economy continues to grow at a healthy pace. Jobs are plentiful and inflation remains low,” said Elaine Buckberg, GM’s chief economist. “Auto demand was better than anticipated in the first half and we expect strong performance in the second half of the year. If the Fed cuts rates, as widely expected, lower financing costs will provide further support to auto sales.”

Toyota sales fell 3.5% on a volume basis and increased 0.3% on a daily selling rate basis.

According to a monthly forecast released jointly J.D. Power and LMC Automotive, June retail sales were expected to fall 2.9% compared with June 2018, while total sales were forecast to drop 1.5% year over year.

Despite slumping sales this year, automakers have cashed in on higher average transaction prices. According to J.D. Power and LMC Automotive, new-vehicle prices are up 4% in the first half of the year compared with the first half of 2018.

“While the first half of 2019 is expected to deliver its weakest retail sales since 2013, the growth in prices has been nothing short of remarkable,” said Thomas King, senior vice president of J.D. Power’s data and analytics division. “Average transaction prices set a record during the first half, which has big implications for manufacturer revenues.”

At the Flint plant, the automaker aims to augment production of its Chevrolet Silverado and GMC Sierra models.

Meanwhile, the $20 million investment in the Texas plant aims to upgrade the plant’s conveyors in preparation for the rollout of the automaker’s new full-size SUVs. According to a GM release, the upgrades are expected to be completed next year.