Western Carmakers are Struggling in China

Automotive executives running carmaking joint ventures in China must be asking themselves regarding the current performance situation: is it a downturn in the lower end of the car market or backlash against trade war?

The Financial Times reported Ford’s plants in China operated at only 11% of capacity during the first six months of this year, as the firm’s car sales plunged to 27% of the same period last year.

Meanwhile, Peugeot owners PSA’s plant in Chang’an produced just 102 cars — yes, you read that right, 102 cars — in the first half of the year, meaning its capacity utilization was below 1%. The firm’s other joint venture with Dongfeng Auto ran at just 22% of capacity, the article reported, as sales were just 62% of the same H1 period last year. 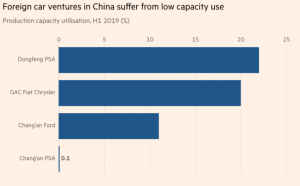 The collapse in sales comes particularly hard as foreign firms have been making such stellar returns from the China market.

Volkswagen and General Motors’ Chinese sales accounted for 38% and 23% of the companies’ respective pre-tax profits last year, so losses will be particularly painful.

Both firms have fared better than Ford and OSA, though. Volkswagen reported a 6% year-on-year sales decline in the first quarter of the year, while sales for GM fell 10%. Capacity utilization has so far held up well, staying above the critical 80% (the generally accepted break-even line). The Financial Times reported the Shanghai GM joint venture is running at 88% capacity, but Volkswagen’s venture with FAW Group achieved only 77% in the first half of this year. 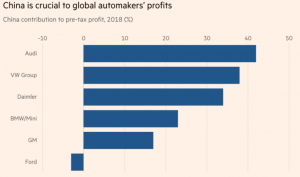 The connection to trade wars comes not just from the probable cause for the collapse in sales, but the disparity among producers.

Japanese carmakers, for example, remain strong. Honda and Toyota are both running extra shifts to maintain better than 100% capacity. Premium European brands are doing well, with Daimler’s Beijing Benz joint venture running close to 90% capacity while BMW Brilliance is running at 96%. If it were just the sale of low-end cars that were suffering, you would expect the Japanese carmakers and Volkswagen to also see a similarly sharp downturn, but they are not.

None of the major carmakers is ready to call time on the massive Chinese car market just yet. At some 23 million cars a year, it remains by far the largest single market, but it is an increasingly challenging market in which to make money.