The Aluminum Monthly Metals Index (MMI) bounced off last month’s three-year low with a three-point increase to 86. All prices in the index increased by more than 3%. 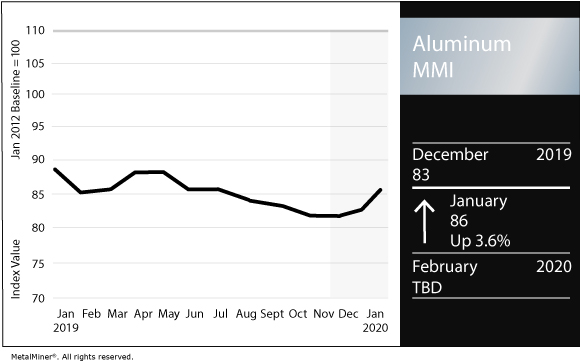 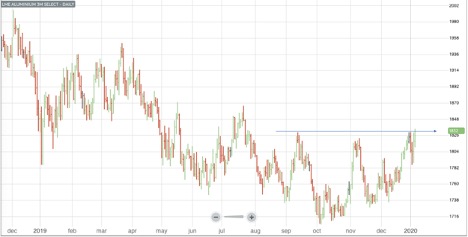 Now analysts are watching to see if lackluster demand will allow recent increases to stick.

SHFE aluminum prices continued to move firmly sideways during the past month, still moving below the CNY 14,500/mt price level. 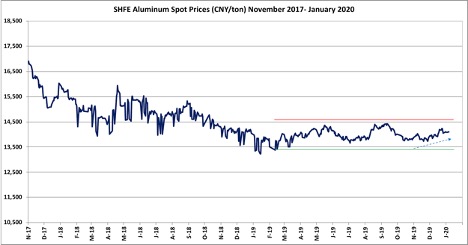 While recent lows remained somewhat higher during December, price highs have not yet exceeded September’s levels. However, SHFE prices did not drop as far back as LME prices over the course of the year, with annual lows for 2019 occurring in January.

Analysts do not anticipate a significant uptick in demand until after the Lunar New Year. This year, the holiday commences fairly early (on Jan. 25).

Based on flat demand growth, reflected in the failure of prices to push above the critical CNY 14,500/mt price level and due to new capacity developments, SHFE aluminum prices look set to continue moving sideways (at least for now).

Although production contracted in China in 2019, production looks set to increase once more in 2020 due to new capacity, plus restored capacity following temporary production declines due to heavy flooding during 2019.

While this first-phase launch represents 450,000 tons in capacity, total capacity of 900,000 tons per year will be ready by the end of 2020. The smelter uses hydropower for production.

Based on data available through November 2019 from the International Aluminum Institute, aluminum production dropped significantly in South America and western Europe (by 8.3% and 7.9%, respectively).

Production levels in China decreased by around 2%, with 32.68 million tons produced during the first 11 months of 2019.

North American production increased by 1.2% to 3.49 million tons produced during the first 11 months of 2019.

On Dec. 10, Rio Tinto announced a strategic review of its New Zealand Aluminum Smelter (NZAS), which is located in Tiwai Point and has a 350,000-ton annual capacity.

The company anticipates a lack of profitability for the operation due to current market conditions and high energy costs. The assessment, which could result in either curtailment or closure, will be completed during Q1 2020.

Slovalco, located in Slovakia and majority-owned by Norsk Hydro, will curtail primary aluminum production by 20% due to the weak market environment (pending final approval at Slovalco’s general meeting), according to a news release from Hydro. The site has an annual capacity of 175,000 tons of primary aluminum; curtailments are expected to start in January.

Buying organizations interested in tracking aluminum prices with embedded forecasting will want to request a demo of the MetalMiner Insights platform.

All values in the index increased by greater than 3% this month.

PREVIOUS POST:
This Morning in Metals: Senate committee approval moves USMCA one step closer to ratification
NEXT POST:
Oil price spikes, then retreats after assassination of top Iranian general — but what’s next?