On that point, Britain’s Monetary Policy Committee, rate setters at the Bank of England, are assuming a smooth transition to a free trade agreement by the end of 2020.

Yet, according to the Financial Times this week, they still announced that in their estimation Britain’s economy would be able to grow at only an average rate of 1.1% over the next three years without sparking damaging inflationary pressure. This is less than half Chancellor of the Exchequer Sajid Javid’s ambition of boosting the growth rate toward 2.8%.

If the 1.1% estimate is correct, it will limit the government’s ability to meet infrastructure and regional development promises made in the immediate aftermath of the recent general election.

A deal is by no means certain, but both sides have a lot to lose if they fail to agree on some level of cooperation, as these graphs from research experts Stratfor illustrate. 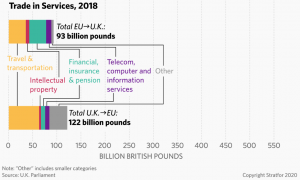 Although the City of London is heavily dependent on access to Europe and is the source of considerable revenues for the Treasury as a result, trade in goods is larger by some multiple. 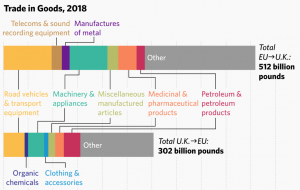 What kind of deal Johnson manages to agree with the E.U. remains to be seen.

Both sides are hardening their positions. Even Downing Street is admitting the prime minister’s plan for Britain to quit the customs union and end alignment with E.U. rules — albeit with a “zero tariffs, zero quotas” trade agreement — “would inevitably mean extra processes are required on UK-EU trade,” hindering just-in-time supply chains and the flexibility of cross-border trade with Europe, a separate Financial Times report states.

Diplomats warn over a heady vision of a future U.K.-E.U. relationship, the article notes, saying the E.U. cannot agree to divergence from E.U. rules and still grant wide-ranging free trade terms. It would be political suicide, encouraging every discontented E.U. member to consider a special relationship. There are many with gripes about one aspect of the bloc or another; Britain was not alone in its discontent.

For the U.K., a period of intense trade negotiations with the E.U. and the rest of the world will now ensue.

Some countries — like Japan, South Korea and Canada — will want to see how negotiations with the E.U. develop before they even consider rolling over their existing E.U. deals to the UK.

Others, like the U.S., have signaled interest in a deal but will drive a hard bargain, particularly on agriculture. The New Statesman reports the U.S. is demanding the U.K. must jettison British food hygiene rules (which currently restrict U.S. exports of beef, pork, chicken and dairy products) and on pharmaceuticals, where pricing on pharmaceutical products and medical devices is a contentious issue with the U.K.’s NHS setting what it considers fair prices for the local market — something U.S. firms object to when they achieve much higher prices in the U.S.

So far, Johnson has shown himself to be a brilliant opportunist, The Economist observes.

But as of yet, there has been little sign of the strategic vision that will be needed in the years ahead if Britain is to find a new position in the world post-Brexit.

Tactical campaigning has served him well so far and is evident in his dash to reward the more deprived regions of the U.K. that supported him in the general election.

But shoring up your power base is not the same as creating a foundation for the country’s future prosperity.

Indeed, prosperity will be an overriding issue during his premiership as the jingoism of “reclaiming sovereignty” subsides.

The Bank of England estimates there is 38% chance of a recession in the U.K. as a result of Brexit. Growth and investment have certainly stalled. Although there is relief a decision has finally been taken, the terms of the U.K.’s relationship with its largest neighbor and trading bloc remain far from clear.

Even the future of the U.K. is at risk if Johnson does not get this right. Northern Ireland and Scotland voted overwhelmingly to stay and feel deeply betrayed by the decision to leave. A second referendum for Scotland’s departure from the U.K. has been squashed by Johnson, but that won’t end the discontent if economic conditions deteriorate.

There are some who believe Britain’s future is best served by holding true to free trade and free markets and that if it is to prosper, an isolationist or protectionist approach is the worst possible outcome.

It remains to be seen if the country has the stomach for the rigors of a free market Singapore or looks for the perceived shelter of a protectionist state, like India.

The challenges are considerable and much will depend on the next twelve months of negotiations.

What is clear, however, is change is coming and it can’t help but be profound.