South Africa, the primary or major source of so many critical metals, is caught in a Catch-22 situation of its own making.

The mining industry is a major employer in South Africa and contributes some 7% of national GDP.

The impact of mining goes beyond mineral extraction and processing.

Mining is linked to many other industries and sectors in the economy, including transportation and construction, and supports whole townships of workers whose livelihood depends on well-paid mining employment, particularly in an economy struggling in other areas of industrial activity mining plays an outsized role.

See the graph below breaking down employment in the country by commodity (courtesy of Statista): 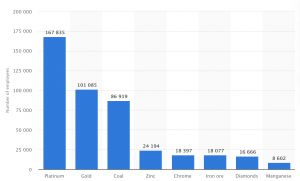 Employment and the economy are therefore still highly dependent on the mining industry, despite improvements in services and consumption over the last 10 years. When the mining and manufacturing sectors are held back, the rest of the economy suffers.

South Africa’s Department of Statistics illustrates the hit to mining and manufacturing last year in this graph: 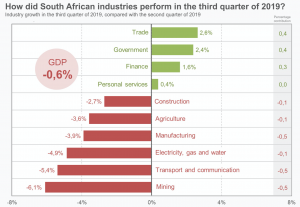 This dismal performance comes on top of weak GDP growth since the turn of the decade that has barely averaged 2% (and often less). Weak growth for an economy with so many young people frustrates opportunities and deprives whole generations of the opportunity to improve living standards.

The economy is being held back by a number of factors, but one significant issue is power.

The South African minerals and energy minister, Gwede Mantashe, is quoted in Mining MX as saying structural constraints and power outages will contribute to South Africa’s forecast GDP growth of less than 1% this year. Power problems were both load shedding and the high cost of energy, which was causing the economy to deindustrialize, he said.

Load shedding has been severe this year and is a disaster for the mining industry, according to Minerals Council of South Africa CEO Roger Baxter. Worse, Eskom, the state power utility, is candidly stating that it will go on for another two years as the near-bankrupt utility struggles with outdated production equipment and lack of investment after years of mismanagement under previous president Jacob Zuma’s regime.

The economy is being held back by power costs and the intermittent or unreliable provision of power, yet the government does not have the money to throw at the problem.

Funds have been made available for a rolling program of urgent maintenance, but it will take at least two, possibly three, years to end the load shedding and electricity costs will remain high. As a result, Mantashe has been forced to announce a historic change of policy this week, freeing up mining companies to invest in their own power-generating capacity and breaking Eskom’s monopoly on power generation in the country.

The relief is almost palpable among miners.

While plans where already in place to create over 600 MW of power, they have now been increased to about 1.5 GW to be bought onstream over the next 9-36 months.

Realistically, the government had few options. The department for minerals and energy has granted 28 mining rights in coal, iron ore and manganese in 2018, representing R 1 billion of potential investment. In a seriously underperforming economy, the department wanted to ensure those projects were delivered.

Without freeing up miners to generate their own power, there was the risk a large number of these projects would not have happened. It remains to be seen now how quickly miners can get capacity installed and running; as they take the pressure off Eskom, the utility will be better able to serve domestic and industrial users.

You have to wonder why it took so long for the decision to be made.

As so often the case, politics appear to have trumped reason in the previous administration; it took a new government to have the foresight to change the rules.