The current plunge in the oil price has less to do with the coronavirus than it does with power politics.

Oil prices crashed by the most in 29 years Sunday night, The Telegraph reported this morning, as Saudi Arabia announced its deal with OPEC+ to limit production was dead in the water. Instead, the kingdom was set to raise output and heavily discount prices.

The resulting drop is the steepest collapse in oil prices since 1991 and takes the market back to levels last seen in early 2016. A barrel cost almost $70 just two months ago but hit $36 this morning and pushed West Texas Intermediate (WTI) down to $32. 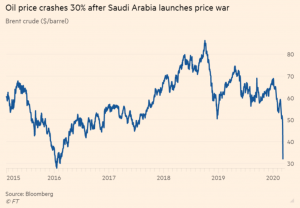 Following Russia’s reported refusal to accept the Saudis’ take-it-or-leave-it demand to further reduce output in an effort to bolster prices, the Financial Times reports the Saudis decided — possibly in an act intended to punish the Russians, possibly simply to put all higher-cost producers out of business — to raise output to the kingdom’s maximum, estimated to be near 12 million barrels a day, thus swamping the market with excess supply.

At the same time, Saudi Aramco announced unprecedented price discounts for April deliveries. In a market that sees price rises and discounts in the range of cents or tens of cents, Saudi Arabia is set to announce that it will sell its crude into northern Europe, a key market for Russian deliveries, the Financial Times notes, at discounts to its March reference price of more than $8 a barrel.

In the U.S., it is also set to discount its crude by around $7 a barrel in April compared with March, with Asian prices down between $4 to $6 a barrel.

Previously, Saudi Arabia had been seeking Russian support to cut output and join them in reducing an additional 1.5 million barrels a day, taking total cuts to 3.6 million b/d — or roughly 4% of global supply, the Financial Times reports, speculating this may have riled Moscow, annoyed at the kingdom’s uncompromising attitude and wider concerns that previous attempts to stabilize prices simply left the field open to U.S. shale producers to take ever-higher market share.

London fell 8% this morning and New York is likely to follow, as a collapse in junk bond prices follows fears U.S. shale producers will struggle. Some 11% of the junk bond market is made up of energy companies in the tight oil and gas sector; a rout of the junk bond market will make rollover of low-grade BB and below debt all but impossible at commercial rates.

But any impact on production may take time to work through as tight oil producers are thought to have hedged output at between $50 to $60 a barrel for this year.

If low prices persist, though casualties will ensue, a Brent oil price around $30 will see rig counts collapse from the current 790 level to below 500 by late summer, the Financial Times suggests.

Saudi Arabia, with operating costs $10 a barrel, can clearly earn a return at $30 and below, but its balanced budget price is much higher.

The question is: how long is it willing to run deficits?

Russia has higher operating costs onshore of $30 but is cushioned by a substantial national wealth fund it has built up over recent years, said to be in the region of $170 billion. The consequence of prolonged low prices is a credit crisis for oil sands and frackers, for their high-net-worth investors, U.S. and Canadian banks, and some hedge funds.

The Financial Times suggests lower petro-dollar revenues means sovereign wealth funds will start first to sell long-dated U.S. and emerging-market bonds before moving on to global equities, which have already taken a major correction due to the coronavirus.

On the plus side, a lower oil price will be a major shot in the arm for net oil consumers, particularly large consumers like India and China, and mature markets like Europe and Japan.

By the time lower oil prices feed through next month, these economies will be feeling the full impact of the spreading Covid-19 virus. A combination of lower central bank borrowing costs and lower energy costs could have a supportive effect, aiding recovery if, as hoped, the virus is brought under control by the summer.

In the meantime, oil price volatility is coming on top of equity market volatility, rattling investors already just waking up to the impact of the coronavirus.