Winners and losers from the oil price crash

The initial reaction to the collapse in oil prices this week, initiated by Saudi Arabia’s unilateral declaration that it would open the spigots and flood the market with oil while simultaneously heavily discounting prices, was followed by optimism in some quarters.

That optimism came with the thought that lower oil prices would aid economies struggling with supply chain and worker attendance challenges as a result of the novel coronavirus (Covid-19) pandemic.

Certainly, lower oil prices will help level balance of payments deficits run by some heavy oil consumers, like India and China. Even Europe, which is a net oil importer, will benefit to varying degrees.

But the size of the price fall will also prove a mixed blessing causing acute pain in other areas, not least among the major players themselves.

The decision had all the hallmarks of a fit of pique on the part of Saudi Arabia’s Crown Prince Mohammad bin Salman, particularly in the manner in which it was announced and in the targeting of the heaviest discounts in Russia’s backyard – Europe. The reality is the Saudis had this lined up as plan B if Russia refused to take what was widely reported as a take-it-or-leave-it demand to cut output by 1.5 million barrels a day to prop up prices.

Russia’s position appears to be this would simply perpetuate a continuation of the current gradual erosion of OPEC+ market share, as U.S. tight oil producers continued to expand on the back of a sustainable oil price.

Russia appears both able and, more importantly, willing to endure a prolonged period of lower oil prices. It has built up a sizable wealth fund, said to be some $170 billion, and has until this week been running a broadly balanced budget.

Saudi Arabia, on the other hand, has been running a deficit for years — since 2014, Bloomberg reports. Even prior to the change of policy, it had been instructing ministries to enact public-unrest-inducing reductions of between 20% and 30% from their 2020 budgets in response to the Covid-19 virus.

As Bloomberg points out, major oil-producing countries’ cost of production is not the same as their fiscal break-even point.

Saudi Arabia is said to have a cost of production of around $12.50 per barrel, but as oil is by far the government’s largest source of revenue, it needs a price of $83.60 to balance the country’s budget.

Russia, by comparison, needs only $42.00; some U.S. tight oil producers are at a similar level.

Unlike shale oil producers, sovereign countries like Saudi Arabia and Russia can run budget deficits; with borrowing costs at historically low levels, that could be maintained for some time.

Bloomberg states the yield on Saudi Arabian government bonds maturing in April 2030 is currently 2.38%, while Russian 10-year bond yields touched a record low of 2.56% last week. Thanks to the slump in Libor, investment-grade energy debt in the U.S. is also quite cheap, in the region of about 2.95% at present.

However, spreads for the junk debt that’s financed so much of America’s shale boom have surged, adding up to about 10.6%. 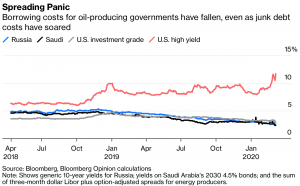 U.S. shale producers were out of favor even before the current oil price crash and smaller players were struggling to roll over debt or refinance.

There will be a sharp cutback in investment and some producers will go to the wall.

But if the Saudis and Russians were hoping for a short war, they could be unlucky.

It will likely be months before a significant dropoff in output occurs. Tight oil producers have largely hedged their 2020 output. In the meantime, we have an impending demand crunch coming in the form of a slowdown due to the Covid-19 virus, which will further depress global oil demand.

Both Saudi Arabia and Russia would be better coming to terms with the part played in global supply by the U.S. shale industry rather than trying to put it out of business.

Output may be suppressed for a while by a lower price and drillers may be put out of business, but all the major producers need prices to be higher in the long term. As soon as prices rise for any period of time, those rigs will be back out in the Permian, the Marcellus and Eagle Ford drilling for oil.

Meanwhile, Saudi Arabia’s financial reserves will be depleted. Its Vision 2030 move to rebalance its economy will be further delayed and its people will their objections that public services and their standard of living are not what they once were.

To finish with a perversion of a phrase describing the Germans’ assault on Russia in the winter of 1942-1943, used by Bloomberg, “In a war of attrition, the winner isn’t the force with overwhelming power, but the one with the greatest capacity to sustain damage.”

Saudi Arabia may yet come to regret its move.

PREVIOUS POST:
Renewables/GOES MMI: Tesla in talks to use cobalt-free batteries
NEXT POST:
This Morning in Metals: Precious metals prices take a tumble