Aluminum mills are moving down the carbon league tables

Despite a plunging LME price and dire short-term prospects for metal consumption in Europe and the U.S., aluminum mills are still following through on long-term plans to improve their environmental credentials.

They are doing this, particularly, to lower the carbon content of their products to meet buyers’ increasing focus on such environmental considerations.

The report states Hongqiao is looking to move some 2 million tons of annual aluminum production while at the same time increasing the use of scrap recycling (in preference to alumina as a raw material).

This will entail the construction of new production lines for melting, alloying and casting of scrap to alloy; however, no plans were announced to close any alumina production.

Hongqiao is a major alumina refiner, producing some 5.28 million tons last year, but this is still far short of its in-house demand which must be on the region of between 12 million and 13 million tons to meet its 6.5-million-ton licensed capacity of primary metal.

The graph below, courtesy of Reuters, shows how some parts of the world remain heavily dependent on the most polluting coal-fired power stations for aluminum production, while others enjoy the majority of power from hydro or, in the case of the Middle East, from somewhat less-polluting natural gas. 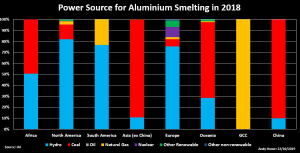 Tech firms like Apple and automotive firms like BMW are actively looking to burnish their own image by marketing their products as having a low-carbon footprint, or, via offsets, as zero carbon.

Yes, I know — offsets are smoke and mirrors, not genuine zero carbon, but this is marketing, not science.

Russia’s Rusal has been moving for the last two years to close its coal-powered smelters in western Russia and invest in its hydropower smelters in Siberia. Arguably, it was ahead of the curve on this but Rusal, like Hydro Aluminium, has enjoyed an inherent advantage over many of its peers since the majority of its primary production has always been based on hydro-powered sources.

Pressure to transition to renewables such as hydropower for all metal producers was ramped up sharply this month when the European Union announced, as part of its Green Deal launched last year, the European Climate Law that includes a “Carbon Border Adjustment Mechanism” – in effect, a carbon import tax, BNE IntelliNews reports.

The effect of the new law will be significant and Russia’s economy, in particular, could be hit hard by the changes.

Goods imported from outside the bloc will have to pay an extra import duty if the supplying factories are not clean and green. This is a serious change for Russia, as the E.U. accounted for 45% of its trade turnover in 2019 and yet greater than 60% of its power comes from old, Soviet-era coal-fired power stations.

But the new law, designed to prevent “carbon leakage” where energy-intensive E.U. companies simply dodge strict E.U. emission laws by moving production to other countries where the rules are not as strict, could have a significant impact on the competitiveness of imports from many other countries, too. Manufacturers are increasingly focusing on carbon content as a distinguishing characteristic among their potential suppliers.