Home | Commodities | Could we be on the way to $10 per barrel oil?
Market Analysis

Popular investor inclination may be that after such a dramatic fall, the oil price has to bounce back, that investor sentiment on the downside was an overreaction.

That inclination might also say after a chance for reflection has been allowed, prices will recover.

But the reality is all we can reliably expect is a period of intense volatility.

A price recovery will only come if the output war between Saudi Arabia and Russia comes to an end.

Both sides have substantial financial reserves. Russia, in particular, is benefitting from a collapse in the ruble against the dollar, making its oil receipts not much different from before hostilities broke out.

Russia can weather this storm for some time to come and seems ill-disposed to reach an agreement for substantial cutbacks any time soon.

Saudi Arabia’s policy, on the other hand, seems to be set largely by the young Crown Prince Mohammed bin Salman bin Abdulaziz Al Saud (or MBS, as his name is sometimes abbreviated by the media).

The crown prince has shown he is willing for Saudi Arabia to make considerable sacrifices if he believes he is in the right — witness the ruinous ongoing war in Yemen the kingdom has been waging for nearly five years (and realistically achieved little in the process).

Earlier this month, the U.S. appointed an energy envoy to Saudi Arabia, raising hopes that the U.S. might broker a truce between the kingdom and Russia.

But so far, no progress has been made.

An announcement by the U.S. that it would add 77 million barrels to its strategic reserve to support prices will do little now that the coronavirus is decimating demand.

As The Economist notes, the vast salt caverns along America’s Gulf Coast that contain the strategic reserve are already about 90% full, so they cannot store enough excess supply even if that were a viable option to impact prices. Not only are national strategic and producer reserves rapidly filling up, but so are consumers. Oilprice.com reports refiners in Baton Rouge could begin to slow deliveries as their own storage facilities max out, further depressing prices.

The article quotes Bernstein, a research firm, which estimates demand in the first half of the year will be maybe 10%, or even 20%, below what it was in 2019.

Many shale drillers are hedged for now and the outlook for output cuts in the short term is limited. Added to this is a potential 1 million barrels a day of output that some analysts fear could come back onto the market from Libya gradually this year.

Talk of sub-$20 per barrel oil that seemed excessively pessimistic just a week or so back is now a reality. CBC reported Friday that Western Canadian Select (WCS) was selling for $6.45 U.S. a barrel Thursday, down U.S. $2.84 from a day earlier.

As a result, it opened the very real possibility that producers, at least in the short term, may have to pay companies to take oil — effectively creating negative oil prices. 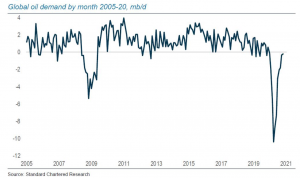 Such chaos will decimate investment and idle exploration, opening up the probability that prices could surge in the years ahead as the industry is unable to meet a return in demand.

For now, though, producers and consumers are going to face a volatile pricing environment, with prices driven as much by sentiment as the appalling underlying fundamentals.