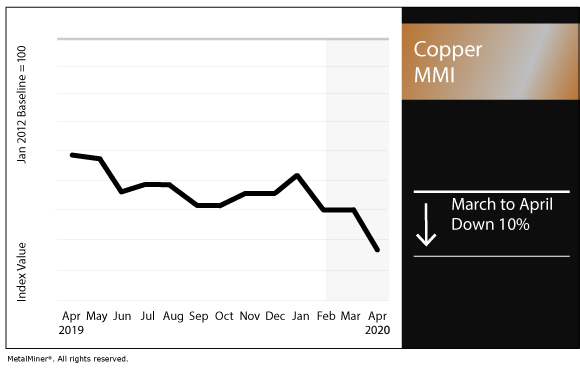 The copper market was weakened by slowing global growth before the coronavirus outbreak, but any stabilization in prices has been undermined by the decimation in demand — first in Asia and now in the west as the virus has spread.

Supply shocks remain a risk as mines are shuttered due to countrywide, virus-prompted lockdowns. It is combination of such concerns and China’s emergence from hibernation that has lifted the copper price from a low of U.S. $4,375 per ton last month to around U.S. $5,000 per ton as of Thursday.

Prospects for a sustained rise into the $5,000-plus range remain slim. However, a more likely pattern will be sentiment-driven volatility, as investors dip in and out of the market on economic and medical news.

According to the ICSG, the global copper market posted a deficit of 340,000 tons last year. When accounting for China’s bonded stocks, the deficit increases to 520,000 tons.

The USGS reported Arizona accounted for 68% of U.S. copper output in 2019. U.S. copper mine production increased 6% to 1.3 million tons.

Nevada Copper announced this week that it has temporarily suspended its Pumpkin Hollow copper project in Nevada “as a result of the restrictions imposed by government-mandated measures and other impacts of the COVID-19 pandemic.”

The company said the temporary disruption is expected to last at least six weeks and “will be subject to revision in response to any further government-mandated measures related to the COVID-19 pandemic, including directives from the Governor of Nevada’s Office.”

Freeport-McMoRan updates on status of Peruvian mine

Freeport-McMoRan, which owns a majority stake in the Cerro Verde copper and molybdenum mine in Peru, noted March 26 the Peruvian government had extended its declaration of a national emergency to April 12.

“Cerro Verde is engaged in discussions with Peruvian government authorities regarding health protocols which would enable Cerro Verde to conduct limited operations during the state of emergency and position Cerro Verde for a return to normal operations as restrictions are lifted,” the company said in a release.

“Our principal focus is on the health and well-being of our workers, their families and the community while maintaining environmental safeguards and protecting the long-term values of this important resource. Cerro Verde is a major contributor to the national and local economy and is one of the largest employers in the Arequipa region.”