As we wrote some weeks ago, the possibility of negatively priced oil has become a reality. Producers desperate to make delivery against CME contracts have been forced to pay leaseholders on space at the Cushing oil depot to take deliveries off their hands.

A great deal for those holding space, premiums paid yesterday reached -$40 a barrel, yet June delivery on the CME remains +$20 — fortunes were made and lost on the day.

The price has subsequently recovered but remains in negative territory at -$4.50 per barrel at the time of writing. The price of the more global Brent benchmark has also dropped sharply in morning trade, back down to just below $24 per barrel. 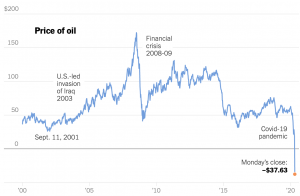 Prices went negative, a New York Times article explains, because futures contracts that require buyers to take possession of oil in May are expiring on Tuesday and nobody wanted the oil because there was no place to store it. Contracts for June delivery were still trading for about $22 a barrel.

The normal outlet, refineries, are unwilling to turn oil into gasoline, diesel and other products because so few people are commuting or taking airplane flights and international trade has slowed sharply. Oil is already being stored on barges, supertankers, and both producer and consumer storage depots.

The article went on to advise that today the Texas Railroad Commission, which regulates oil and gas drilling, will take up a proposal for a 20% statewide production cut.

The commission used to regularly manage oil production but hasn’t done so since the early 1970s. Nonetheless, it remains the only authority with the ability to mandate output.

Exxon Mobil and other large companies are said to have opposed mandated cuts, but some smaller companies want the commission to act.

Scott Sheffield, chief executive of Pioneer Natural Resources, is reported by The New York Times as saying that if the oil price stayed around $20 a barrel for a while, 80% of the hundreds of independent oil companies in the state would be forced into bankruptcy and 250,000 workers would lose their jobs.

A ban on oil imports is a possibility, but the U.S. is already producing more than it is consuming. While a ban would reduce some pressure, it would not in and of itself resolve the oversupply problem.

However, a sense of realism needs to be adopted when viewing these negative prices.

As the Financial Times points out today, the current negative price points are likely to be a temporary phenomenon and it was only the front-month May contract that went negative.

That’s set to expire today (Tuesday) and only a handful of traders — notably, those with theoretical capacity to take delivery in Cushing, Oklahoma — would have been active in those contracts. So, the article goes on, while the story is rightly getting a lot of attention, it’s not true to say that oil prices are currently negative in terms of the broader market.

The bulk of financial trading activity will have moved on to the June contract days ago and we should co-view what is happening with WTI with what is happening in the wider global oil market, where Brent remains firmly positive above U.S. $20 a barrel.

However, if tanker freight rates begin to rise, it could signal that even tanker storage space is becoming limited, in which case further weakness in Brent and the wider global oil market could be developing.

For now, the WTI will likely swing back into positive territory but will remain weak as chronic oversupply is going to undermine a recovery.

Investors’ eyes will be on the Texas Railroad Commission’s deliberations today amid expectations of mandated cuts.