Home | Macroeconomics | China has a bit of a dilemma … and by extension, so does the rest of the world
Industry News

China has a bit of a dilemma … and by extension, so does the rest of the world

After the last crisis, China was instrumental in spurring global growth and helped pull the West and neighboring economies along with it. Through state stimulus, China achieved double-digit growth, far beyond what its underlying economy would have otherwise been capable.

But such growth came at immense cost, as Zheng Yongnian, a research professor at the East Asian Institute, writes in the Straits Times.

The 2008 stimulus blockbuster spawned many problems, such as overheating of the economy, capital inflation, financial market distortions, inefficient expansion of production capacity and soaring housing prices. As a result, China has become one of the world’s most indebted economies in less than a decade, with debts hidden away on the books of local governments and state-run companies.

Beijing is highly unlikely to repeat that mistake again and arguably has more world-class infrastructure than it needs or will ever get a viable return from.

So, what is it likely to do and will its actions result in a boost to metal prices and global GDP as many hope?

Reports of a sharp uptick in growth, such as the Financial Times’ post this month of price rises for excavators and building equipment in China signal an encouraging return to growth for the construction sector, which was hit by the Chinese New Year closely followed by a near countrywide COVID-19 induced lockdown.

GDP contracted by some 6.8% in the first quarter, the Financial Times reports; sales of construction equipment understandably slumped. The economy has a lot of catching up to do, but unlike last time it isn’t expected to happen fast. 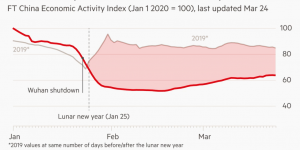 A bounce-back as the economy opens up is to be expected. Pent-up demand alone would drive buying as firms scramble to complete construction contracts.

But sustained infrastructure investment, as opposed to the retail housing market, requires investment from local government. Despite Beijing relaxing borrowing rules, most local governments are too strapped for cash to borrow and spend in the style of the last recovery.

Plus, with the rest of the world only tentatively emerging at varying stages from its own COVID-19 crisis, exports are not likely to prove much of a stimulus. Indeed, China’s traditional export model is fundamentally impaired by growing protectionism around the world and will likely never again fill the role it once did for the country.

What China needs is a rise in consumption. In the Financial Times’ opinion, fundamental flaws in China’s economy are going to be a long-term drag on China optimizing that opportunity.

China has an extremely unbalanced economy, the Financial Times observes. At the heart of this imbalance lies the very low share of income that ordinary households retain of China’s gross domestic product, compared with that of local governments, businesses and the very wealthy. At roughly half of GDP, it is among the lowest of any country in history.

According to Professor Zheng Yongnian, Beijing is considering policies to boost consumption, similar to the U.S.’s direct payments to citizens. In the case of China, the thinking is this would be in the form of vouchers, as lower-income Chinese tend to save if given a lump sum — and the economy needs spending, not saving.

The professor’s opinion is that these and other programs, such as market reforms and investment in new infrastructure (like 5G networks and server infrastructure), while valuable for long-term prosperity, are not sufficiently dynamic to boost GDP substantially in the short to medium term.

Metal prices will, therefore, be lifted by sentiment, on the expectation rising GDP will boost metals demand. Copper, in particular, is sensitive to such dynamics, but a firming of prices is far from the doubling we saw post-2008.

In the absence of a China bull story, this time around metal prices are likely to remain much more subdued — and for longer.

PREVIOUS POST:
This Morning in Metals: Arconic to resume operations at Tennessee facility
NEXT POST:
EIA: U.S. energy production exceeds consumption in 2019 for first time since 1957