From a position of nearly crushing the automotive industry, the coronavirus pandemic could ironically be its savior.

A recent article in the Financial Times explores the issues driving — no pun intended — an increase in buyer activity as lockdowns around the world are gradually eased and the impact imperatives of social distancing and virus anxiety are having on buyer behavior.

Most marked is the change in attitudes among young people and urbanites, the article notes. Better public transport and increasing access to ride-hailing services like Uber have driven a slide in car ownership by younger members of the population. 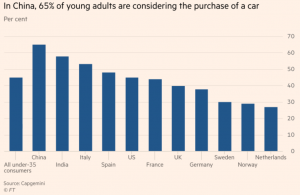 But fear of catching the virus, probably most keenly felt on trains, subways, and buses, is driving a surge in demand for car ownership among this same underrepresented car-owning demographic.

In the U.K., interest in car buying surged after Prime Minister Boris Johnson announced in early May a slight easing of lockdown rules. Anyone returning to work was urged by the prime minister to “avoid public transport as much as possible,” the Financial Times reports. Traffic on Auto Trader, the U.K. online car marketplace, peaked on the day of the speech at more than 1 million views — the highest since the lockdown began in March.

In China, where the lockdown eased earlier than in Europe and North America, road congestion was back to 90% of pre-lockdown levels by the middle of April, while subway use languished at just 50%. In the U.S., a fifth of 3,000 residents polled in mid-March by Cars.com said they were considering buying a car because of COVID-19, the Financial Times reports. Meanwhile, about 43% of respondents said they had stopped using public transportation, almost the same percentage as those hailing fewer ride-shares.

This has already translated into a surge of interest and a sharp increase in purchases for both used and new cars, a welcome sign for automakers who have lost billions due to shuttering plants and are worried a severe recession would hit sales for months if not years to come.

But some headwinds remain.

Unemployment is up sharply and is unlikely to return to pre-virus levels for years, let alone months. As the article notes, as more people return to work and the roads clog up again, the appeal of sitting in traffic may wane.

Cities have spent years dissuading motorists, introducing charging schemes for entering city centers and repurposing road space as cycle lanes. Last week, London controversially restored the congestion charge for driving in the center of the city, even as the government was urging people to use their cars and keep off public transport. Fees are to be increased from £11.50 per day to £15.00, while at the same time announcing plans to make some central thoroughfares car-free.

Such attitudes are mirrored across most of Europe and, increasingly, cities around the world in a long-term effort to reduce urban air pollution. Against such a backdrop, car ownership may hold a shorter-term appeal.

The industry itself has been clamoring for government assistance both direct to support workers’ wages, in terms of cheap loans for cash flow and as stimulus measures — with a specific focus in Europe, at least on electric vehicles (EV).

Not surprisingly, Greenpeace points to the clean air and blue skies that have been the result of lockdowns and suggests this will drive demand for EVs. While you would expect such optimism from Greenpeace, some quarters in the automotive industry itself are also calling for any stimulus measures to be an investment in the future, not support for the past. Scrappage schemes or direct subsidies for EVs would have to be: a) substantial to overcome the capital cost of buying an EV (the total cost of ownership over 3-4 years is arguably in EVs’ favor, but they cost a lot more to buy than automobiles powered by internal combustion engines) and b) be matched by an even larger investment in charging infrastructure to overcome range anxiety, which remains most buyers’ second objection to EVs.

The industry will be grateful for a rapid return of car sales, however it is achieved. In addition, automotive workers will no doubt be keen to be taken back on before government furlough support is removed and the industry has to contemplate the possibility of mass layoffs.