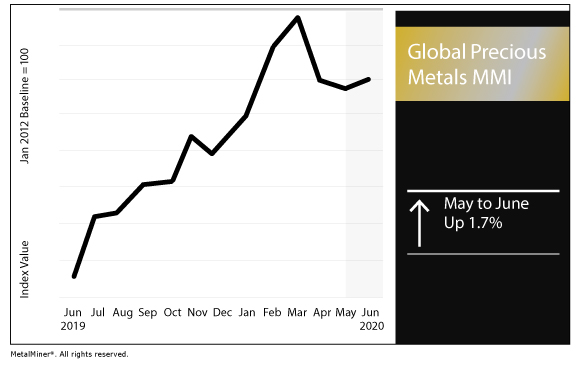 Amid the coronavirus pandemic, gold prices have, unsurprisingly, surged in value, rising from below $1,500/ounce as of mid-March to around $1,750/ounce two months later.

Since mid-May, however, the gold price has started to level out, generally falling in a band between $1,720/ounce and $1,730/ounce.

After that, the gold price closed last week at $1,679/ounce, before bouncing back early this week and approaching $1,720/ounce.

In the U.S., states have begun to roll back business restrictions imposed in response to the coronavirus outbreak, cooling some appetite for gold as a safe haven in challenging economic conditions. In that vein, the Business Cycle Dating Committee of the National Bureau of Economic Research recently officially declared the U.S. had entered a recession in February.

“The committee has determined that a peak in monthly economic activity occurred in the U.S. economy in February 2020,” the committee said in a release. “The peak marks the end of the expansion that began in June 2009 and the beginning of a recession. The expansion lasted 128 months, the longest in the history of U.S. business cycles dating back to 1854. The previous record was held by the business expansion that lasted for 120 months from March 1991 to March 2001.”

Meanwhile, the U.S. dollar — which typically correlates inversely with the gold price — has fallen of late. After reaching a 2020 peak of 102.82 in late March, the dollar’s value has dropped down to 96.41 as of Tuesday, marking a decline of 6.2%.

South Africa, one of the world’s top producers of platinum and palladium, is dealing with its own challenges stemming from the coronavirus outbreak.

The country was decisive in its early actions. The government imposed an initial 21-day lockdown in late March, which it then extended by an additional two weeks — taking it to the end of April — while allowing for the partial restart of mining activity at a maximum of 50% of capacity.

In April, Impala Platinum hailed the partial restart of its operations in the country. However, approximately a month later, Implats announced it would temporarily suspend its Marula operations following a “cluster” of COVID-19 cases there — illustrating the challenges of such operations in a post-COVID-19 world.

“Implats has identified 19 positive cases during the week, all of them asymptomatic – meaning the individuals tested exhibited no apparent coronavirus symptoms. Of these cases, 14 were identified as the result of proactive testing of employees returning to work,” the firm said. “None of these employees had started work at the mine. Of the remaining five, one case was identified as a primary contact and the remaining four were identified through contact tracing. Two of the active cases had recently returned from the Eastern Cape. Significantly, 17 of the confirmed cases reside locally, suggesting the prevalence of COVID-19 among local communities is far higher than the company’s initial estimates had indicated.”

“In total, out of 120 test results received, 51 employees have tested positive for COVID-19,” Sibanye-Stillwater reported in a release May 28. “All of the contacts traced were asymptomatic at the time the tests were performed. All positive cases have been counselled and moved from quarantine to isolation in line with national health protocols, with on-site facilities available for those who may need them. The workplaces to which these cases were traced have been closed and the related crew members who did not test positive (21 people) working in shifts at these workplaces, have been quarantined. The other contacts who did not test positive (47 people) will also remain in quarantine for 14 days as a precaution in line with the Company’s guidelines and protocols.”

Russian palladium producer Norilsk Nickel announced May 27 it would cover expenses to allow employees to extend their quarantine periods.

“Nornickel will be covering expenses needed to extend the quarantine period for employees in Norilsk (Krasnoyarsk Territory) and at Kola MMC (Murmansk Region) in an effort to keep the epidemiological situation stable and to prevent a new outbreak of COVID-19,” Norilsk said in a statement.

“Quarantine measures will be extended due to the start of the annual holiday season: everyone returning from a holiday from 1 June to 1 October 2020 will be required to self isolate for a period of 14 days.”

Although the spread between palladium and platinum narrowed slightly, palladium continues to trade at a significant premium to platinum.