The shipping industry’s woes started before the current pandemic.

Trade tensions between the U.S. and China had depressed demand throughout 2019. On a longer time frame, a trend to nearshoring or onshoring and the rise of automation were both creating headwinds for the unfettered growth of globalization on which the global shipping industry depends. 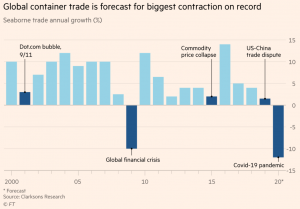 Even the 2008-2009 global financial crisis only depressed global trade volumes down by about 10%. While that ushered in an era of brutal competition between the major shipping lines, both rates and the majority of lines recovered (South Korea’s Hanjin being a notable exception in 2016).

The coronavirus pandemic, though, has been far worse in terms of volume of demand, albeit for a shorter time period.

Trade volumes dropped dramatically as the pandemic spread, one measure of that being transits through the Suez Canal, a crucial shipping route for the Asia-European trade. Container ship transits were down 15% year on year, faltering continuously since January, International Shipping News reports, and were down by 32% year on year in May to settle at an all-time low by the beginning of this month.

Lines have been nimble and reacted quickly to changing events by blanking sailings, consolidating or sharing services, and laying up or idling unused vessels. Shipping rates have, therefore, held up well so far, which is maybe not what consumers want to hear; however, for the health of the industry, it at least helps ensure the survival of the major lines.

The chief executive of SeaIntelligence Consulting, Lars Jensen, is quoted by the Financial Times as saying if container freight rates fell by the same quantum as in 2009, the industry could rack up losses of $23 billion this year, driving many into bankruptcy. Combined profits at the top 15 container lines were only $5.9 billion in 2019, according to the consultancy.

But if rates remained stable, the steep decline in trade volumes that is considered a near certainty this year would only lead to a loss of roughly $800 million — a manageable sum.

The industry is keen to avoid a price war.

Since 2009 there have been mergers, consolidations, and moves to share services and forge alliances to weather future storms (such as they are currently going through). Today, a smaller number of larger lines operate under three main alliances: 2M, Ocean Alliance and THE Alliance, allowing companies to share space on vessels and more easily reduce services.

Unlike the onset of the 2008 financial crisis, today there are relatively few new vessels under construction — just 10% of the fleets compared to 50% in the mid-2000s – reducing the pressure for lines to take on new debt while still carrying excess capacity. 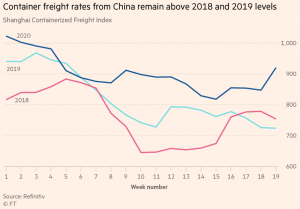 As a result of firms’ nimble response to the pandemic, the Financial Times reports the Shanghai Containerized Freight Index, which tracks the freight rates that container shipping lines charge everyone, from the world’s biggest retailers like Walmart to global manufacturers such as Volkswagen, has fallen in 2020 but remains higher than a year ago (as anyone moving cargoes during this period will attest).

Despite the World Trade Organization predicting that merchandise trade, or the import and export of physical goods, will plummet between 13-32% this year, Jeffries forecasts container freight rates will fall only about 5% this year.

That’s not exactly the cost saving many struggling manufacturers and consumers had hoped there would be.