Copper MMI: Will the copper price continue in its V-shaped recovery?

The Copper Monthly Metals Index (MMI) increased by 8.8% for this month’s MMI reading as copper prices continue to increase globally. 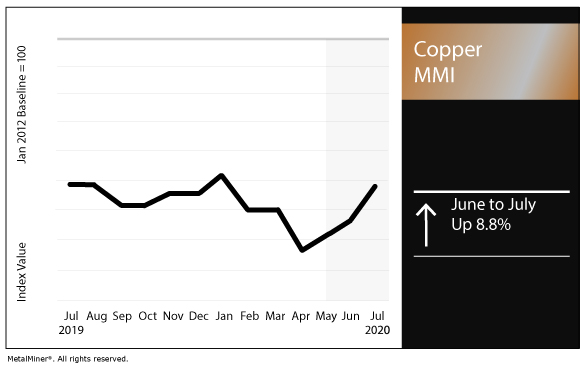 Does Your Company Know the 5 Best Practices of Metals Based Sourcing?

The recovery of the copper price has been stunning, as it has been supported by the return of Chinese demand and on the back of government economic stimulus.

The LME copper price rose 21% this past quarter, making it the best quarter since the quarter ending September 2010.

Meanwhile, the August copper contract on the SHFE was up 24.7% this quarter, making it the best quarter since Q4 2009, as reported by the Financial Post.

As mentioned earlier, the red metal owes much of its rapid price recovery to rising demand in China.

A copper rod maker in Guangdong region told Reuters that they expect orders to be much lower in July. This is based on a seasonally weak demand period from June to August, during which China slows down construction due to the hot and rainy summer — meaning demand could pick up by September.

The recovery of the prices is also based on the expectations that the global economy will return to normal within the next few quarters. The degree of this recovery is still uncertain, with some analysts predicting a slower economic recovery as industries ramp up.

Another factor helping recovery was the Chinese restrictions on scrap inflow, which classify high-quality copper scrap as waste. As we reported last month, this forced Chinese smelters to import large amounts of copper concentrate directly from miners and import U.S. copper concentrate for the first time since late 2018.

Concerns over tight supply in China

A week ago, Reuters reported that the China Smelters Purchase Team (CSPT) reduced treatment and refining charges (TC/RCs) to $53/mt and $0.053/lb, respectively, for copper concentrate over concerns of tight supply.

Generally, when there is a large concentrate supply, smelters have more bargaining powers and they raise TC/RCs.

In this case, concentrate supply is tight.

To counterweight the low supply, China’s Ministry of Ecology and Environment has been approving import quotas for solid waste — as scrap is considered to be — at least until the end of 2020. In January of this year, China’s State Administration for Market Regulation (SAMR) published new standards to reclassify high-grade scrap as a resource instead of solid waste.

The new system, which was set to take effect July 1, does not have a custom code yet (which has caused some confusion in the market).

The Chilean copper output had not been affected by the coronavirus until now.

However, it was reported a few days ago that coronavirus cases are increasing rapidly within the sector.

Codelco recorded three coronavirus-related fatalities in June. As a preventive measure, the state-owned company suspended its smelting operations at its Chuquicamata smelter and refinery.

BHP is also scaling down. The company announced an adjustment to its mine plan at Cerro Colorado, which will include a reduction in operation and headcount.

These developments mean we might see tighter production restrictions as the country deals with the health crisis.

Want to See How to Explain Procurement Performance to Your Executive Team?

PREVIOUS POST:
ArcelorMittal lays out its Green Deal for Europe
NEXT POST:
This Morning in Metals: U.S. steel shipments down 32.9% in May