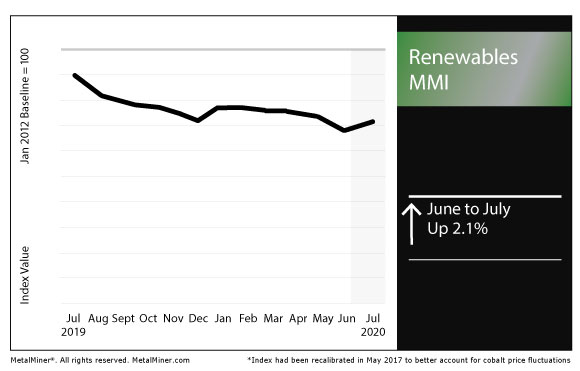 When most people think of cobalt, what usually comes to mind are things like electric vehicle batteries.

What also often comes to mind are labor conditions in cobalt mining operations, particularly in the Democratic Republic of the Congo (where most of the world’s cobalt is mined).

As such, more and more scrutiny has been devoted to the cobalt supply chains of major companies, as documented by Amnesty International and other organizations in recent years.

“Minerals from the DRC have become a byword for exploitive, unethically supplied metals; as a result, the good get tarnished by the bad,” Burns wrote.

“Not surprisingly, most battery and automakers prefer to steer well clear of the country, likely paying a premium to take supplies from refiners in the West (on whose supply chain assurances they rely if challenged).

“So, it could be seen as a brave move by Elon Musk and Tesla to go direct for cobalt supplies needed by their current Shanghai and future Berlin battery plants. Teaming up with Glencore, who produces about a fifth of the country’s cobalt output, negates allegations of sourcing conflict minerals. It is true Glencore’s governance has been challenged and the miner is being investigated by the U.S. Department of Justice. However, to date, the worst that process has thrown up is an association with discredited individuals and old accusations of money laundering, referring to cases not just in the DRC but also Nigeria and Venezuela going back to 2007.”

Long term, Tesla has stated its goal is to phase cobalt out of its supply chain.

Among other factors making a transition away from cobalt more attractive, cost is a primary motivation.

In other words, cobalt is expensive.

As such, researchers around the world have explored battery technology that could yield similar performance at a lower cost by removing cobalt.

A research team at the University of Texas at Austin reported on its findings related to a cobalt-free high-energy lithium-ion battery.

“Researchers from the Cockrell School of Engineering at The University of Texas at Austin say they’ve cracked the code to a cobalt-free high-energy lithium-ion battery, eliminating the cobalt and opening the door to reducing the costs of producing batteries while boosting performance in some ways,” UT News reported. “The team reported a new class of cathodes — the electrode in a battery where all the cobalt typically resides — anchored by high nickel content. The cathode in their study is 89% nickel. Manganese and aluminum make up the other key elements.”

The research team’s findings were published in Advanced Materials.

The report summarized the team’s breakthrough.

“During synthesis, they were able to ensure the ions of the various metals remained evenly distributed across the crystal structure in the cathode,” the UT News report explains. “When these ions bunch up, performance degrades, and that problem has plagued previous cobalt-free, high-energy batteries, Manthiram said. By keeping the ions evenly distributed, the researchers were able to avoid performance loss.”

The index for grain-oriented electrical steel (GOES), the GOES MMI, gained 1.2% for this month’s reading. 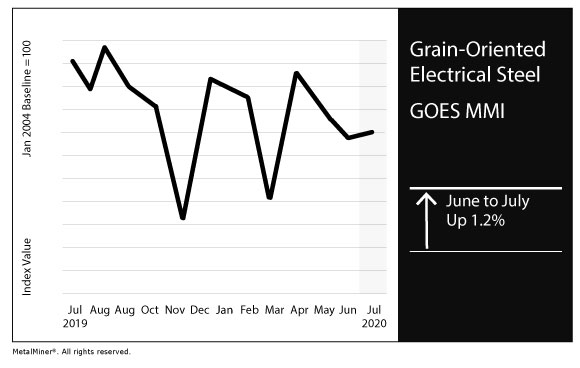 In global GOES news, Japanese GOES mills have started negotiations on prices for deliveries during the second half of the year, the TEX Report noted.

According to the TEX Report, the coronavirus pandemic has seemingly not had a significant impact on inquiries from buyers in the U.S. and Europe.