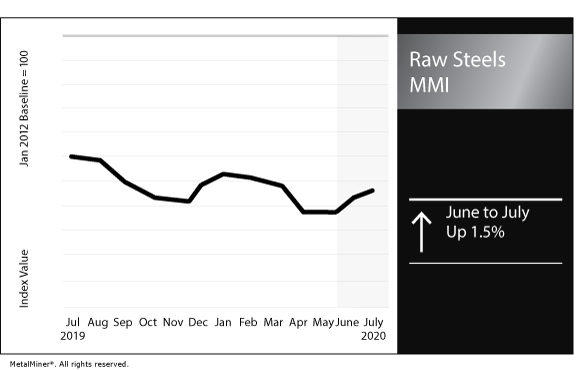 The Chinese HRC price and the U.S. price diverged in June.

We know there are many popular steel contracting indices. But you shouldn’t use them very often. See why!

Plate is the only form of steel that seems to be closing the price gap. Chinese prices traded flat for most of the year, closing last week at $604/mt (or CNY 4,230/mt) and U.S. prices recovered to $611/mt after dropping to $566/mt in mid-June.

These price divergences are due to the recovery China has seen after reactivating its economy and uncertainty the U.S. market is still experiencing as coronavirus cases in the country continue to rise.

During the SMU Community Chat Webinar on July 1, Ryerson President and CEO Eddie Lehner stated in order for steel demand to recover, the country needs to rebuild the segments of the GDP that took a hit during the pandemic by continuing stimulating demand and investment confidence.

He pointed out that during the pandemic, construction and defense remained relatively strong, but aerospace, heavy machinery and heavy transportation equipment suffered. If demand comes back up, the worst of the price risk should be behind us, particularly for HRC, he added.

His comments coincide with the latest Institute for Supply Management (ISM) report, which revealed growth in the manufacturing sector in June.

Lehner also mentioned consumers have changed some of their spending habits.

Automotive sales have seen some recovery due to safety concerns over public transportation and air travel which have brought sales projections from 9-10 million units for 2020 to 15 million or higher. Other products that benefit from social distancing are RVs, campers, fitness equipment and boats.

Steel production increases in the U.S.

The American Iron and Steel Institute reported steel production continues to increase, reaching a total of 1,289,000 tons and a capacity utilization of 57.5% for the week ending July 11. While this marked the fifth consecutive week of improvement, the current week’s production represents a 30.2% decrease from the same period in the previous year.

This means the steel market will remain in oversupply for the time being.

However, industry leaders like Lehner highlighted the importance of investing in innovation in order to be competitive and recover from the economic crisis. Investment in the upgrade of manufacturing equipment and infrastructure would easily absorb new steelmaking capacity.

In June, China imported 101.68 million metric tons of iron ore, a 17% jump from May and the highest monthly import level since October 2017, according to Reuters.

This is a clear indicator Chinese demand is well into recovery mode.

Zhao Yu, an analyst with Huatai Futures, suggested most of the imports came from Australia, that just closed its financial year and was eager to deliver as much ore as it could, but also because steel mills are preparing for the demand ramp up after the Chinese rainy season (which usually means a construction slowdown).

The 5 Golden Rules for Sourcing Steel