True to form, if not to scale, Beijing resorted to infrastructure spending this quarter to support the economy as it sought to pull the country out of government-imposed lockdowns in the first quarter.

China has been ahead of the rest of the world in terms of timing with this pandemic. The country went into it earlier and, likewise, is coming out earlier.

Do you use cost breakdowns in your steel negotiations? See other tips in negotiating with mills and service centers

It is therefore not surprising that there has been a lot of focus on the country’s recovery to judge how Western economies may bounce back.

While some metals, like steel and copper, have been positively supported by good demand and strong price recovery, this should not be seen that China has returned to full health.

The economy is facing many of the same challenges Western economies are also going through. Those challenges include a gradual, rather than V-shaped, recovery in consumption and high levels of unemployment.

In the Financial Times, Qu Hongbin, co-head of Asia economic research at HSBC, says he expects growth of 1.2% in the second quarter compared with last year.

“It’s not yet a full recovery,” he added. Growth in the first quarter fell 6.8% in China’s first annual decline in 40 years.

Manufacturing has understandably been hit hard. First, manufacturing was hit by an internal lockdown, then by the impact on lockdowns around the world.

China’s industrial production — including manufacturing, mining, and energy — is expected to have performed better in the second quarter. Even so, that is a simply bounce back from a fall of 8.4% in Q1.

Retail sales have remained weak in Q2 despite lockdowns ending months ago.

May retail sales were still down 2.8% on last year. Thursday’s latest figures show GDP growth of 3.4%. Retail sales remain in negative territory, however, down 3.9%.

Much as in Western economies, workers are returning to work but remain cautious.

A UBS survey quoted by the Financial Times estimates 92% of respondents had returned to work by May.

However, two-thirds of them reported lower incomes and 62% decreased their consumption in the past three months.

In a familiar pattern to the West, the survey found people were spending more on daily goods and less on travel, offline entertainment and restaurants. 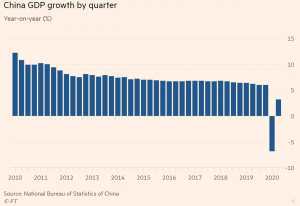 Source: National Bureau of Statistics of China via the Financial Times

Retail sales reflect consumers’ caution. Savings rates have gone up, much as they have in Europe and North America. Rising unemployment makes consumers cautious about the future.

The central government has raised the total amount of “special purpose” debt states can take on for infrastructure projects to Rmb 3.75 trillion ($531 billion), the Financial Times reports. This has been the stimulus that has supported sentiment for metals consumption.

Unlike past recoveries, where domestic consumption and property inflation all moved in lockstep, this time the sugar rush of infrastructure may not be enough to promote sustained support on its own.

Upcoming negotiation on your aluminum buy? Make sure you know how your service centers will negotiate with you

Beijing is keen to promote spending to boost activity. However, like governments elsewhere, it is finding there is only so much that can be done while consumers remain cautious — both about their health and their incomes.

The public’s mantra to stay home and stay safe is being applied to economics as much as health in China, much as it is elsewhere.