All the base metals have been lifted by an expected end to lockdowns and a pickup in activity, particularly in China this quarter.

The weakening U.S. dollar has added a further fillip in recent weeks.

Despite recent gains, nickel price still down for the year

But nickel has proved the laggard, still 5% down on its position at year-end.

This is despite recent comments by Elon Musk during a second-quarter earnings call. Musk called on miners to efficiently mine more nickel to meet Tesla’s massive upcoming demand for the metal, Teslarati.com reported.

Are rising surcharges causing concern? Make sure your base prices are held fixed. See how service centers negotiate with you.

As Reuters observed, the much greater market for stainless steel still remains the main driver for nickel demand and, hence, price.

While the coronavirus pandemic has wreaked havoc with many supply chains, particularly among South American miners, ore production in Indonesia and the Philippines has remained relatively stable (with the former’s ban on ore exports manifesting itself as robust exports of metal in the form of nickel pig iron and refined nickel).

Stainless steel output down 8% in Q1

Unfortunately for the nickel price, the main market for the metal has not kept pace.

Production fell by 9% in China and by 7% in the rest of the world, marking the first synchronized downturn since the fourth quarter of 2018, according to the post.

The problem is not hard to understand.

Stainless steel’s exposure to sectors such as hospitality (cutlery), oil and gas (pipes) and aerospace creates considerable headwinds for the nickel market this year.

Overproduction by Chinese stainless-steel producers fighting for market share might mitigate the nickel hit, but only at the expense of a build in stocks further down the chain, Reuters suggests. 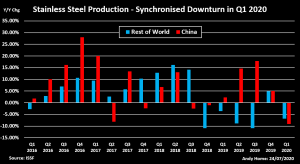 Maybe Musk’s call to arms is not complete hyperbole.

Battery producers’ demand for the metal will increase as more factories are built.

But if the nickel price remains at current levels, new mines will not be brought on stream.

Quite the reverse, projects are being shelved for want of an economic nickel price, creating a risk down the line that supplies will not be as plentiful.

Battery demand is still some way off challenging stainless steel as a driver of the nickel price. Perceived bullish news such as Musk’s comments create a temporary fillip to the price.

Then, reality sets in and prices ease back.

Do you know the 5 best practices of sourcing metals including stainless steel?

For now, stainless steel remains the name of the game; demand there is anything but dynamic.