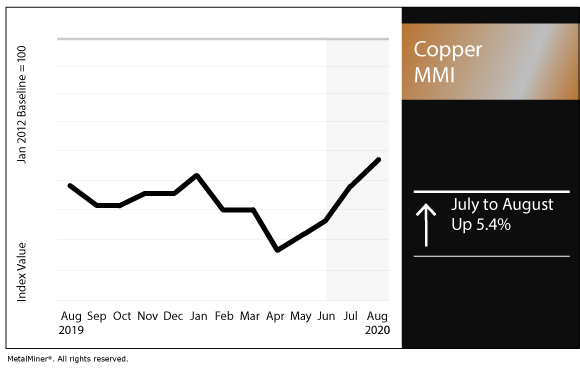 LME copper prices increased through the first half of July and have traded sideways since mid-July.

Want an occasional email from MetalMiner that highlights new content with NO sales ploys?

Will prices temporarily slow down?

LME copper prices continued to rise throughout July. The price reached a 14-month high by surpassing the $6,400/mt level.

However, the price increase seems to have slowed. LME and SHFE prices have trended sideways for the last three weeks.

On the other hand, SHFE stocks had the exact opposite trend. SHFE stocks increased by 60% to 159,513 tons by the end of the month. This could be due to the fact that even though demand in China remains strong, it tends to have a seasonally weak demand period from June to August. During that period, in which construction slows due to the hot and rainy summer (as MetalMiner reported last month).

Another factor contributing to the price slowdown is that despite positive sentiment toward economic recovery in the next few months, the rest of the world needs to show more signs of demand improvement.

Moreover, a week ago, the Brent crude market appeared to have moved back into contango.

This could signal the demand recovery expected for the second half of 2020 could appear too optimistic, which may bring some negative sentiment to copper prices.

Another explanation as to why LME stocks remain low while SHFE stocks have surged involves China’s record copper imports in July.

Reuters reported China imported 762,211 tons of raw copper and copper products in July, a 16.1% increase from the previous month.

High demand from the Chinese manufacturing industry and durable goods sectors drives the high import levels. However, the main driver may have been the arbitrage between the LME and the SHFE prices.

The National Statistics Institute (INE) of Chile reported at the end of July that copper production had declined 0.6% to 472,172 metric tons in June.

July marked the first month since the beginning of the pandemic that copper production in Chile saw little impact due to the coronavirus. Until now, Chile served as the only main producer that did not implement temporary shutdowns. However, throughout June, producers had to scale down as some reported coronavirus-related fatalities.

Despite Chile being one of the hardest-hit countries in South America, coronavirus cases seemed to have peaked in mid-June. As such, production could ramp up later this year.

Does your company have a copper buying strategy based on current copper price trends?

PREVIOUS POST:
This Morning in Metals: Ontario Premier Doug Ford says U.S. steel tariffs could be next
NEXT POST:
First, Canadian aluminum … could U.S. target steel next for tariffs?