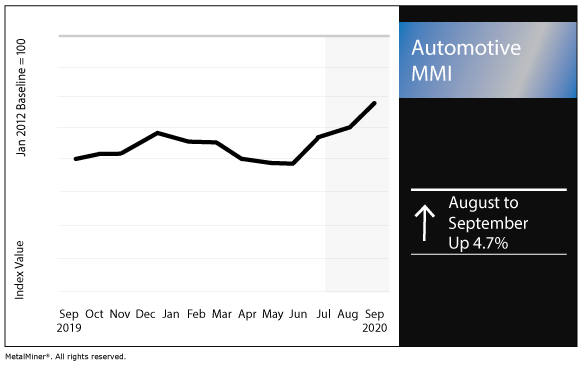 “Despite a down market, our SUVs continue to drive sales and deliver results for us and our dealers,” said Randy Parker, vice president of national sales for Hyundai Motor America. “Our entire line up performed well, but Palisade led the pack and is one of the fastest selling vehicles in the industry. Sonata sales were up, because customers still want great, high-quality, safe sedans.”

“Thanks to the dedicated efforts of our retailer network, we are able to count August as the best sales month of 2020,” said Thomas J. Doll, president and CEO of Subaru of America, Inc. “Our retailers are continuing to sell at very high levels of sales efficiency given their on-ground inventory levels while at the same time providing a Love Promise customer experience. We are grateful for their outstanding efforts.”

While automotive sales have recovered somewhat over the summer months, August 2020 sales remained down year over year.

According to a forecast released jointly by J.D. Power and LMC Automotive, retails sales were expected to fall 3.7% compared to J.D. Power’s pre-virus forecast to 1.17 million units.

Total sales were expected to reach a seasonally adjusted annualized rate of 15.1 million vehicles, or down 2 million units from a year ago.

“Given the ongoing disruption that COVID-19 has on the industry, the fact that retail sales of new vehicles are only 4% below the pre-virus forecast is evidence of strong consumer demand for vehicles,” said Thomas King, president of the data and analytics division at J.D. Power. “The modest decline also is a result of significant inventory constraints.”

A joint venture of Toyota and Mazda, Mazda Toyota Manufacturing, last month announced an additional investment of $830 million in its U.S. facility in Huntsville, Alabama.

The investment will contribute to “cutting-edge manufacturing technologies to its production lines and provide enhanced training to its workforce of up to 4,000 employees,” Toyota said in a release.

The additional $830 million comes on top of the $1.6 billion investment originally announced in 2018.

“The new facility will have the capacity to produce up to 150,000 units of a future Mazda crossover vehicle and up to 150,000 units of the Toyota SUV each year,” Toyota said. “MTM continues to target up to 4,000 new jobs and has hired approximately 600 employees to date, with plans to resume accepting applications for production positions later in 2020.”

Meanwhile, automotive sales in China gained in July for a fourth consecutive month.

According to the China Association of Automobile manufacturers, sales rose 16.4% year over year in July.

The rise comes on the heels of year-over-year increases in April, May and June.

PREVIOUS POST:
The case for firmer steel scrap prices
NEXT POST:
This Morning in Metals: U.S. energy exports, imports nearly equal in May