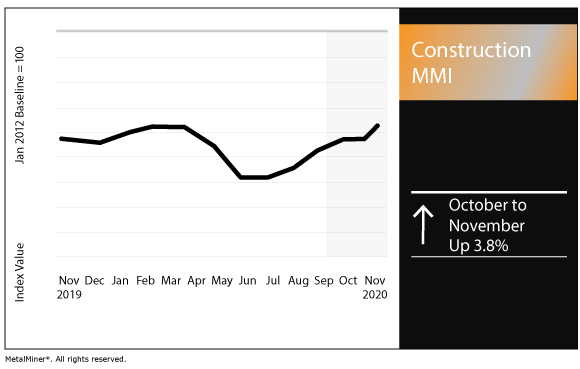 Aside from construction spending, the Architecture Billings Index (ABI), released monthly by the American Institute of Architects, posted a September billings index reading of 47.0.
The September reading marked an increase from the previous month’s 40.0. Nonetheless, any reading below 50.0 indicates billings contraction.

“The third quarter of 2020 ended on a more promising note for architecture firms, as fewer firms reported declining billings in September than in recent months,” the latest ABI report stated. “While the ABI score of 47.0 for the month means that the majority of firms still saw a decline in their firm billings, things have taken a more encouraging turn from the last three months where the recovery had all but stalled.”
By region, the West and Midwest led the way with billings readings of 45.6. The South checked in at 43.7 and the Northeast registered an index reading of 41.5.
This month’s ABI survey question asked architecture firms about their revenue expectations for the remainder of this year and 2021.
“Firms reported that they expect their revenue to decrease by an average of 1.9% from the third quarter to the fourth quarter of 2020, with firms located in the Northeast, and small firms with annual revenue of less than $250,000, expecting larger losses, of 5.6% and 5.5%, respectively,” the report states.

Pending home sales down 2.2% in September

Although private residential construction spending rose in September, pending home sales grew for four straight months before falling by 2.2% in September, according to the National Association of Realtors (NAR).
The Pending Home Sales Index fell to 130.0 in September. An index reading of 100 is equivalent to contract activity in 2001.
“The demand for home buying remains super strong, even with a slight monthly pullback in September, and we’re still likely to end the year with more homes sold overall in 2020 than in 2019,” said Lawrence Yun, NAR’s chief economist. “With persistent low mortgage rates and some degree of a continuing jobs recovery, more contract signings are expected in the near future.”