The Construction Monthly Metals Index (MMI) picked up by 4.4% this month, as December construction spending rose and the Biden infrastructure plan could serve as a major support beam for metals prices. 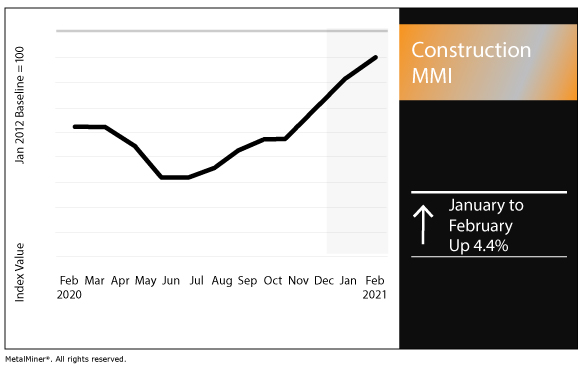 The House passed a $1.5 trillion infrastructure bill in July 2020. However, the bill never advanced further amid opposition in the Senate and from then-Senate Majority Leader Mitch McConnell.

So, what has President Joe Biden said about infrastructure?

As a candidate, he called for the construction of a “modern, sustainable infrastructure” to deliver an “equitable clean energy future.”

As president, Biden has already signed 25 executive orders. Among them, he signed an order outlining the administration’s vision for tackling the climate crisis.

“Despite the peril that is already evident, there is promise in the solutions—opportunities to create well-paying union jobs to build a modern and sustainable infrastructure, deliver an equitable, clean energy future, and put the United States on a path to achieve net-zero emissions, economy-wide, by no later than 2050,” the executive order reads.

In addition, the order calls for the chairman of the Council on Environmental Quality, the director of the Office of Management and Budget, and the National Climate Advisor, in consultation with the Advisory Council, to jointly publish recommendations on “how certain Federal investments might be made toward a goal that 40 percent of the overall benefits flow to disadvantaged communities.”

“The recommendations shall focus on investments in the areas of clean energy and energy efficiency; clean transit; affordable and sustainable housing; training and workforce development; the remediation and reduction of legacy pollution; and the development of critical clean water infrastructure,” the order continued.

As with the automotive sector, the transition to such a clean-energy economy and infrastructure is not something that can happen overnight.

With that said, a large-scale infrastructure plan would have a stimulative effect. Such a plan would provide new employment in addition to upgrading US infrastructure systems badly in need of upgrading, whether it’s aging public transportation, unsafe water delivery systems or outdated and polluting energy grids.

“Biden will make a $2 trillion accelerated investment, with a plan to deploy those resources over his first term, setting us on an irreversible course to meet the ambitious climate progress that science demands,” Biden’s campaign website stated.

Whether an infrastructure plan amounting to $2 trillion actually passes, a sizable plan will assuredly be supportive of metals prices.

For instance, as we noted in the Automotive MMI report, rising electric vehicle demand will spur copper demand. In the executive order on climate, Biden called for the deployment of zero-emission government vehicles, including for the United States Postal Service.

The Architecture Billings Index (ABI), released monthly by the American Institute of Architects, posted an index value of 42.6 in December.

The value declined from 46.3 the previous month. An ABI value less than 50 indicates billings decline.

“Business conditions at architecture firms backslid in December, ending a tough year on a disappointing note,” the ABI report stated. “The AIA’s Architecture Billings Index (ABI) score declined to 42.6 for the month, indicating that more firms saw declining billings in December than in November. Although some year-end softness is to be expected at many firms, the ABI analysis takes these seasonal factors into account, so it is unlikely the decline is due to just the typical December slowdown.”

AGCA: Construction employment remains below pre-pandemic levels in most states

“While most states recorded construction employment gains in December, the pickup is likely to be temporary for many,” said Ken Simonson, AGCA’s chief economist. “Participants in our association’s recent Hiring and Business Outlook Survey expect the dollar volume of most project types available to bid on to decline in 2021.”

However, construction employment increased in 37 states from November to December.