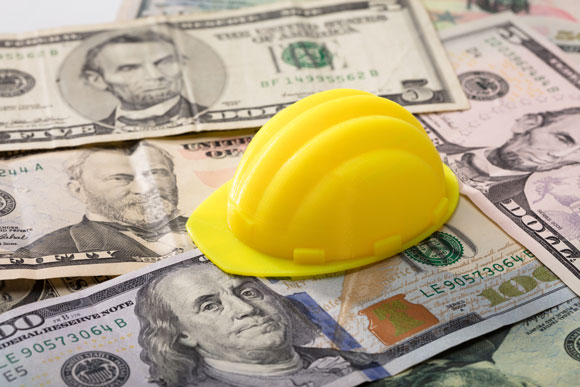 The Construction Monthly Metals Index (MMI) rose by 3.2% this month, as January 2021 construction spending picked up. 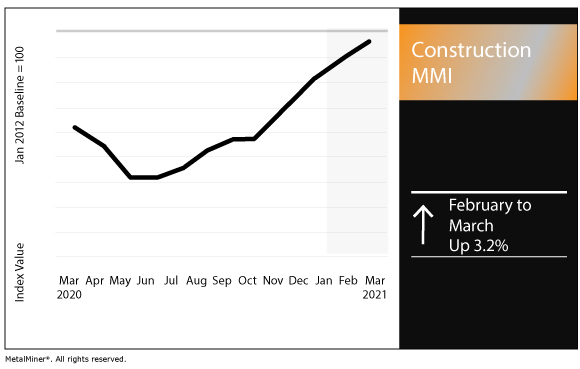 US construction spending in January reached a seasonally adjusted annual rate of $1,521.5 billion, the Census Bureau reported this week.

ABI moves up but remains low

The Architecture Billings Index (ABI), released monthly by the American Institute of Architects, reached a January reading of 44.9.

The January reading marked an increase from 42.3 the previous month. However, any reading less than 50 indicates a contraction in billings.

While the sub-50 billings index reading marked the 11th straight month of billings contraction, there are some reasons for optimism, the ABI report stated.

“Inquiries into new work at firms reached its highest level since the pandemic began, while the value of new design contracts also approached growth once again, following two months of weaker conditions,” this month’s report stated. “With vaccinations picking up speed, and plans for additional relief measures making their way through Congress, there may be more reasons for hope ahead.”

As the pandemic began to impact every aspect of Americans’ lives near the tail end of Q1 2020, some manufacturers idled production, consumers canceled vacation plans and employees working from home contributed to a drop in oil demand.

So, what about construction projects active in Q1 2020 that were delayed by the arrival of the COVID-19 pandemic?

This month’s ABI survey question asked architecture firms about the status of projects active as of Q1 2020 and prior to the pandemic.

The good news is that an overwhelming percentage of respondents indicated there have not been many outright cancellations.

Of the respondents, 93% said at least a few of their firm’s active projects from Q1 2020 have since been successfully completed with no major delays or issues.

According to the most recently available employment summary from the Bureau of Labor Statistics, construction sector employment growth hit a wall to open 2021.

Since last February, construction industry employment is down by 256,000.

The BLS will release the employment summary for February on Friday, March 5, at 8:30 a.m. EST.

Like the automotive market last summer, prospective home buyers are dealing with a relative scarcity of inventory.

According to the National Association of Realtors (NAR), pending home sales fell 2.8% in January from the previous month.

On the other hand, January pending home sales were up 13% on a year-over-year basis.

“Pending home sales fell in January because there are simply not enough homes to match the demand on the market,” said Lawrence Yun, NAR’s chief economist. “That said, there has been an increase in permits and requests to build new homes.”

The January 2021 construction spending gain could continue to pick up momentum as demand from prospective home buyers leads to some new construction.