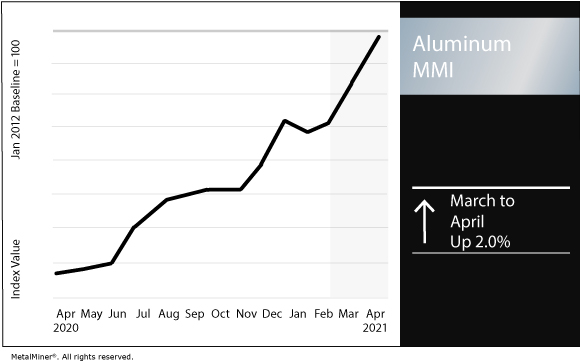 In fact, rising premiums are a sign of market tightness, MetalMiner’s Stuart Burns explained this month. Furthermore, premiums are up in both the US and Europe.

Among the reasons for the rise, China’s shift to net importer has led to the country sucking up a large share of available supply.

“Imports like that, much on spot markets or via traders, has sucked exchange traded and shadow market metal east, placing it conveniently for short onward shipment to China.

“As a result, there is less metal available in warehouses in Europe and the US.”

The Midwest Premium reached $0.22 per pound this week. In January, the premium had fallen as low as $0.12 per pound.

The February total compared with 5.14 million metric tons in February 2020.

The company said it had produced the lowest-carbon aluminum ever.

“En+ Group Metals segment (RUSAL) has successfully produced aluminium with the industry’s lowest carbon footprint – less than 0.01 tonnes of CO2 equivalent per tonne of metal (Scope 1, Scope 2 – direct and indirect energy emissions),” the firm said in a release. “The purity of the aluminium produced is higher than 99%.”

The group produced the aluminum at its Krasnoyarsk aluminum plant.

“The technology replaces standard carbon anodes with inert, non-consumable materials – ceramics or alloys, which results in a major reduction of emissions from the smelting process,” Burns wrote. “Not only are carbon emissions down by 85%, but the technology reportedly releases oxygen in the process of aluminum production. One inert anode cell can generate the same volume of oxygen as 70 hectares of forest, the group claims.”

The announcement of En+’s latest low-carbon development adds another feather to a the cap of a company that has embraced green production.

As such, while some part of the aluminum industry in Europe has expressed opposition to the EU’s proposed Carbon Border Adjustment Mechanism, Burns argued En+ and Rusal might actually welcome a new carbon tax.

“That being the case, Rusal would probably welcome a CBAM,” he wrote. “The firm would have gotten preferred status even before the new technology was proven. With 100% of Rusal’s aluminum now made from hydropower, it already had one of the lowest carbon footprints in the industry.

“But the takeaway here is market forces are driving dramatically lower carbon content in European aluminum. Ultimately, that trend may prove a more dynamic influence than industrywide catch-all legislation, like the CBAM.”

In other green aluminum news, aluminum roller and recycler Novelis Inc. announced it intends to reach net-zero carbon emissions by 2050.

“The company will continue increasing the use of recycled content in its products and engaging with customers, suppliers, and industry peers across the value chain to drive innovation that improves aluminum’s overall sustainability,” the company said in a release.

Chinese aluminum scrap rose by 6.2% from March 1 to April 1, reaching $2,181 per metric ton. Meanwhile, the Chinese primary cash price ticked up marginally to $2,634 per metric ton.