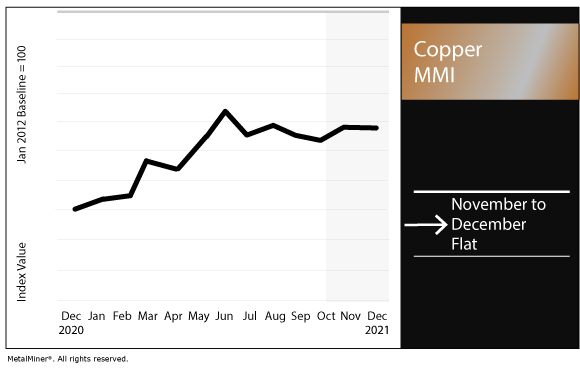 After the mid-October spike, copper prices have begun to consolidate.

Any bullish technical patterns are at risk of invalidation, as prices appear to trade consistently lower. Additionally, its failure to break out of any bullish structures within smaller time frames suggests a weakness in buyer momentum.

Until the occurrence of a strong rally to continue the long-term uptrend, copper will likely become bearish, as it cannot sustain its breakthroughs of historical resistance levels.

As inflationary pressures mount, the Federal Reserve may double the pace of its tapering of quantitative easing measures that were put in place at the onset of the pandemic. The Fed had started to reduce bond purchases from $120 billion per month in November on track to be completed by mid-2022.

The Consumer Price Index reached a 30-year high in October, expanding to 6.2%. In a recent blog post, the IMF encouraged such policy revisions, stating, “We see grounds for monetary policy in the United States—with gross domestic product close to pre-pandemic trends, tight labor markets, and now broad-based inflationary pressures—to place greater weight on inflation risks as compared to some other advanced economies including the euro area. It would be appropriate for the Federal Reserve to accelerate the taper of the asset purchases and bring forward the path for policy rate increase.”

Historically, copper prices have a positive correlation with inflation. Efforts to rein in inflation will likely add to bullish sentiment.

Market concerns over the emergence of the Omicron variant appear short-lived.

Copper prices spiked Nov. 25 to $9,895/mt alongside other base metals, as uncertainty arose over the new variant upon direction from the World Health Organization (WHO) to member states to begin widespread testing for Omicron as it may cause “future surges of Covid-19, which would have severe consequences.” Prices quickly retraced and continued sideways, however, as reported symptoms appeared mild and current vaccines are believed to be effective in the prevention of severe outcomes upon infection.

The bill would levy a 3% tax on producers whose volumes exceed 12,000 tons of copper per year, as well as a progressive royalty based on the copper price. The bill is set to return to committee, where members are expected to amend it before it returns for another vote.

Opposition to the bill from politicians and industry members, including BHP Group, suggest such taxes would cause certain firms to go out of business, hinder future investment in the region and diminish Chile’s global competitiveness. Further criticism relates to the application of the bill’s royalties. Uncertainty persists as to whether the royalties would replace existing taxes or supplement them. Should the latter scenario occur, total taxes could extend as high as 80%.

With aims to encourage the value and development of its domestic mining industries, Indonesia is once again exploring the possibility of a copper concentrate export ban to start in 2023. President Joko Wibodo stated such considerations at a recent national coordination meeting alongside the possibility of similar bans for both raw bauxite and tin. Indonesia had previously banned exports of nickel ore in 2020.

This ban would come alongside the completion of multiple smelters that would give the country full capacity to process the entirety of its copper concentrate into refined copper. The firm Freeport-McMoran will complete construction of a 2 million ton-per-year capacity processing smelter in December 2023. It has announced intentions to build an additional 1.7 million tons per year processing smelter as soon as 2024.

Chinese primary cash copper remained unchanged from the prior month and held firm at $10,916 per metric ton. Similarly, Chinese copper scrap saw a nominal 0.4% decrease to $10,146 per metric ton.