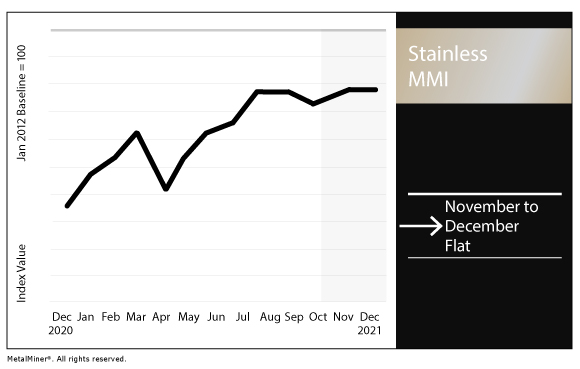 Nickel prices appear to have consolidated following the late November spike. As with other base metals, nickel has started to show a high degree of volatility and uncertainty that would suggest a breakout of the current trading range is imminent.

Multiple bearish indicators, including decreased buyer volume as well as bearish wedge formations, lead to the probability of further breakdowns in price should nickel prices fail to sustain a bullish breakout above October’s high.

As the year winds to a close, Indonesia is on track to overtake India as the world’s second-leading stainless steel producer, according to data released by the U.K.-based research institute MEPS. Production during 2021 is expected to surpass 4.5 million tons. COVID-19 lockdown measures and oxygen rationing to steelmakers impacted Indian production in Q2. Production had returned on pace by the third quarter.

Meanwhile, as a result of power shortages and production cuts throughout the year, Chinese output remained constrained. Production in South Korea and Japan, however, is set to grow by 12% and 20%, respectively.

In total, forecasts for global stainless steel output in 2021 have reached 56.8 million tons to reflect 11.6% year-over-year growth. For 2022, global output is expected to expand by an additional 2.5% to 58.2 million tons.

Following a recent $525 million deal, Nickel Mines of Australia is set to acquire a 70% stake in the Oracle Nickel project. As part of the terms, the company will invest $154 million into construction that will add four rotary kiln electric furnace lines. Construction will begin no later than February 2023. Upon completion, the project will have an annual nameplate capacity of 36,000 tons per year of contained nickel in nickel pig iron.

The deal is part of the Nickel Mine’s larger goals to become one of the world’s top 10 producers of nickel. Recently, the company increased its stake by 30% in the Angel Nickel project, bringing its total interest to 80%. That project, also in Indonesia, will begin no later than October 2022.

LME three-month nickel prices reached $21,050/mt as nickel continued to decline in LME warehouse stocks over recent months, which has fostered bullish sentiment. The price surge and subsequent retracement saw elevated LME buyer volumes on both the upside and downside. That is an indicator of market uncertainty, as both buyers and sellers look to take control over the trend direction.

Meanwhile, as LME inventories fall, refined nickel imports to China have grown. Imports during the first 10 months of the year advanced by 96% year over year. China’s domestic supply was limited throughout 2021 due to multiple factors that include the energy crisis. Additionally, a maintenance outage at the leading producer Jinchuan Group and the operator Jilin Jien Nickel’s switch from nickel cathode to nickel sulphate production have exacerbated market tightness.