The Copper Monthly Metals Index (MMI) held flat at 119 from January to February. 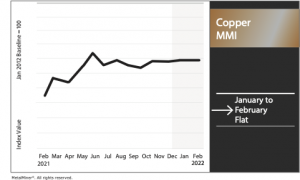 Members of an environmental committee in Chile voted for mine nationalization on Feb. 1. The proposal for “the Nationalization and New Social Environmental Management of Copper Mining, Lithium and other Strategic Assets” passed with 13-to-6 approval.

In spite of this early advance, the future of such a drastic change remains far from certain. Chile elected leftist President Gabriel Boric last year who will take office in March. Boric campaigned on increasing mining royalties and additional social services. Chile’s Congress, however, remains strongly divided. As such, any reforms will require moderation to pass. The nationalization proposal was widely controversial. Its adoption would require two thirds support of the full assembly. From there, it would become part of the draft charter set for a referendum vote later in the year. Chile has undertaken the process of a constitutional rewrite. The current constitution originated under the Pinochet dictatorship.

Meanwhile, a mining royalty bill continues its way through Chile’s legislature. An earlier version of the bill included a 3% tax on producers whose volumes exceed 12,000 tons of copper per year. The bill also included a progressive royalty based on the copper price.  This bill passed an initial vote in late November. Following staunch industry pushback, the bill was subsequently amended.

In the latest version, royalties would reflect the value of gross copper sales and profitability. Mines whose output levels do not reach 50,000 metric tons would remain exempt. Mines with production up to 200,000 metric tons annually, would face a tax that corresponds to 1% of annual sales. For the mines that exceed those volumes, the royalty applied would reflect the average annual LME copper price.

The bill will now go to the Senate Treasury Committee. It will then go to a plenary session of the chamber before it returns to the lower Chamber of Deputies. Should the bill successfully pass through this process, it could become law as early as March. Multiple countries including Chile have considered proposals to increase royalties and taxes on mining activity.

While Russia serves as a leading producer of both aluminum and nickel, it also boasts roughly 10% of the world’s copper reserves. Globally, only Chile and Peru’s copper reserves rival Russia’s. Alongside climbing copper prices and expectations of strong future demand, miners look to cash in. Russia intends to begin mining at Udokan as well as an additional Siberian reserve, Baimskaya.

Both projects pose challenges. Udokan, among the world’s largest untapped reserves, as it holds upwards of 26 million tons of copper, requires the removal of a mountaintop to access its copper ore. Such constraints have prevented its development until now. After it was acquired in 2008 by USM Holdings and following a staggering $7 billion of investments, the mine could begin production in 2022. By 2026, annual production will reach 400,000 tons.

Baimskaya is situated within the Arctic Tundra. Its remote location poses logistics constraints as it lacks access to a railroad or port and would require a floating nuclear power plant in the Arctic Ocean to source its energy. Once complete in 2027, the mine will produce around 300,000 tons of copper annually.

Between both projects alongside others, Russia will become the fourth-largest copper producer in the world by 2030, with total production exceeding 2 million tons per year.