The World Steel Association released its 2017 annual crude steel report on Wednesday, which showed steel output increases in almost every part of the world last year. 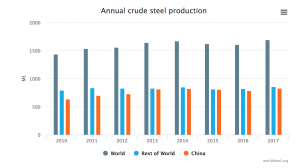 China Leads the Way, but Capacity Closures Will Tighten Supply

Not surprisingly, China once again dominated the global stage in steel production, churning out just under half of the world’s supply.

China led the way with its 831.7 MT output. However, capacity cuts will likely see that number drop going forward. The state-led capacity closures dating back to November aim to reduce pollution in the country.

In fact, according to a poll of analysts responding to a Financial Times survey, Chinese steel output is expected to grow by just 0.6% this year — a far cry from the 5.7% increase from 2016 to 2017. Some have expressed concerns that the capacity closures will simply be canceled out by new capacity starts — on paper, though, the Chinese government’s stated capacity closure agenda will do much toward bringing global output numbers down.

Rounding out the rest of the top 10, in descending order, were: