Tantalum, Lithium Markets Set to Grow Over Next Four Years 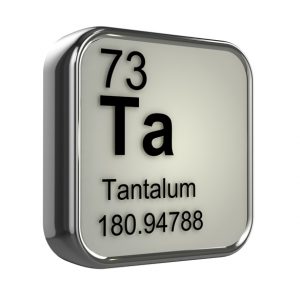 While tantalum and lithium aren’t materials we often talk about in this space — even so, founder and Executive Editor Lisa Reisman’s 2011 post on tantalum prices remains one of MetalMiner’s most-viewed posts — they are metals that could see their stock rise in the coming years, according to a recent report.

According to a report by London-based market research firm Technavio, the global tantalum market is expected to grow by a compound annual growth rate (CAGR) of more than 3% from 2017-2021.

Tantalum was discovered by the Swedish chemist Anders Gustaf Ekeberg in 1802 and named after the Greek mythological figure Tantalus. It is highly resistant to corrosion by acids, boasts a high melting point, and is a good conductor of heat and electricity.

While that’s all very interesting to you, you might be wondering: what is it actually used for?

According to the research report, tantalum will see its stock rise as a result of global penetration by the smartphone market. Smartphone shipments will increase by 1.3 billion units in the next few years, according to the report, as smartphone technology and internet functionality become more prevalent in developing countries.

Tantalum capacitors are used in automotive electronics, mobile phones and personal computers, according to the U.S. Geologic Survey (USGS).

However, when it comes to the U.S., it has had to get its tantalum from elsewhere.

“The United States does not have a niobium or tantalum mining industry because resources are of low grade, and the United States must import all of its niobium and tantalum source materials for processing,” according to the USGS.

In fact, “no significant U.S. tantalum mine production has been reported since 1959,” according to the USGS.

So where does the U.S.’s tantalum come from?

When considering all three subcategories, China leads the way in total tantalum imports at 37%, followed by: Kazakhstan, 25%; Germany, 14%; Thailand, 12%; and other, 12%.

Similarly, lithium has a growing role in the global economy, particularly in the form of lithium-ion batteries for hybrid and electric vehicles, according to the Technavio report. In fact, by 2024 the global lithium ion battery market will surpass $60 billion, according to a report by Global Market Insights, Inc.