Last month, in our headline for the monthly update article on the Global Precious MMI, we called out the fact that platinum and palladium prices had dropped. Then we asked: “Will it continue?” 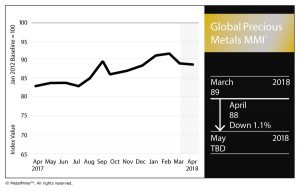 Well folks, if our Magic 8-Ball were to answer, it’d say — signs point to yes.

At least for this month’s index reading.

With losses in U.S. platinum and palladium pricing leading the way, our Global Precious Monthly Metals Index (MMI), tracking a basket of precious metals from across the globe, floated down yet again for April — dropping 1.1% and settling into a two-month downtrend.

(Last month, we had initially reported that before March’s drop, the index had been in a two-month uptrend. Correction: it had in fact been in a four-month uptrend at that point.)

Both stock markets and commodities markets have been in a bit of turmoil lately, with President Trump implementing tariffs on steel, aluminum and potentially 1,300 categories’ worth of additional Chinese imports mid-last month, and China coming back with retaliatory tariffs on a number of non-metal U.S. commodity exports.

It wouldn’t be a stretch to say that knock-on effects are being seen in the precious metals markets.

Yet platinum and palladium prices told a different story.

The longer-term picture for platinum as a crucial component of industrial manufacturing continues to get murkier.

According to a Reuters interview with Bart Biebuyck, executive director of the European Commission’s fuel cell and hydrogen joint undertaking, “the volume of platinum used in fuel cell-powered cars could be cut to ‘micro levels’ within three years and eradicated altogether in a decade’s time, making these environmentally-friendly vehicles much cheaper to buy.”

He said the amount of platinum in the next generation of fuel cell cars had already been cut to levels similar to that used in the catalytic converters of diesel vehicles, which industry estimates put at 3-7 grams, according to Reuters.

With the automotive industry — which accounts for about 40% of platinum demand — looking to cut costs, that 3-to-7-gram range for diesel vehicles may steadily but surely decrease in coming years. That’s because, as we reported last month, the gradual but very real retirement of diesel engines across the European continent continued.

A German court ruled that cities have the right to ban diesel cars from driving the roads in certain areas. Of course, the Volkswagen scandal and its aftermath proved to be a big blow for diesel cars, as well.

If more diesel engines go extinct, with them will go corresponding PGM consumption for catalytic converters.