Global Precious MMI: Higher Platinum, Palladium Prices May Have to Wait for 2019

Last month we noted that record-low prices characterized the Global Precious Monthly Metals Index (MMI) monthly reading and posed the question: will there be more price drops to come? 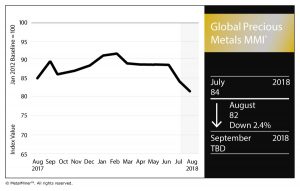 From the looks of it, the short answer to that is … yes.

Going by the August 2018 reading of MetalMiner’s Global Precious MMI, which tracks a basket of precious metals from across the globe, the subindex suffered a loss of 2.4%, falling to a value of 82.

The last time we saw the Global Precious MMI at that level was February 2017.

Platinum and palladium seemed to drive the loss this month, yet all major forms of precious metals across geographies ended up lower this month.

For example, the U.S. platinum bar price dropped 1.8% to $837 per ounce. Palladium is still transacting at a premium to platinum in the U.S. market, but not in the China or Japan markets (although exchange rates may ultimately be affecting that relationship). The U.S. palladium bar price dropped for August as well, down 2.1% to $928 per ounce.

All of these metals appear to be in a long-term downtrend since the tail end of 2017 and first couple months of 2018.

What Buyers Should Consider