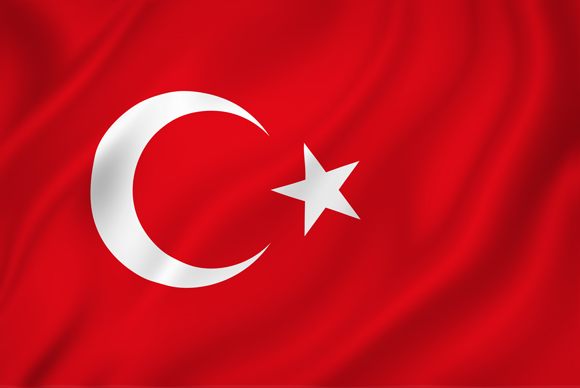 Turkey may not be a big cheese in many ways, but its currency has taken a hammering following President Donald Trump’s threats of doubling tariffs and dire sanctions against a select few individuals close to authoritarian President Recep Tayyip Erdoğan.

But apart from the impact on one or two other emerging-market currencies, like South Africa’s, the rest of the world has barely noticed.

In one industry, however, Turkey is a sizable player: steel.

The country, strategically placed at the crossroads between the Middle East and Europe – and close to Russia and Ukraine — is the world’s eighth-largest steel producer and ninth-largest steel importer. The steel industry is largely based on electric arc furnaces (EAF) and is a major importer of scrap for melting and billet for rerolling.

As a result, the formation of the LME billet and scrap contracts were heavily influenced by considerations of the Turkish market.

To put that in proportion, it is about half the U.S. imports of steel, yet for an economy a fraction of the U.S.’s in size. Much of that comes from Russia and Ukraine in the form of flat rolled products and billets for rerolling, according to U.K. government sources. 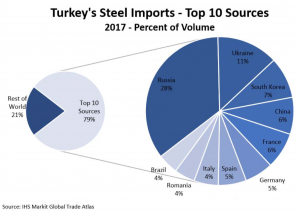 Turkey is also a sizable importer of scrap, with Platts reporting ferrous scrap imports rose 15.8% year on year to 10.77 million metric tons in the first six months of 2018 on the back of strong domestic melting and steel output.

Since then, however, imports have plummeted and the near collapse of the Turkish lira has raised fears imports of scrap and met coal will fall due to the weak lira and counter-tariffs imposed by Ankara on U.S. supplies. Price volatility has stimulated a surge in hedging and speculative activity on the LME’s new scrap contract.

Those sanctions are having a profound impact on Turkey’s sizable exports of finished steel to the U.S.

Earlier this month, the U.S. announced plans to double tariffs on the nation’s steel to 50%, and raise the rate on aluminum to 20%. Prior to sanctions, Turkey made up 62% of rebar coming into the U.S. It also accounted for 37% of imported pipes for piling and 14% of cold-rolled sheet. Turkey exported about 500,000 tons to the U.S. in the five months to May, compared with more than 1 million tons in the same period last year; so, even before the sanctions, the U.S. has fallen from Turkey’s main steel buyer to No. 3.

Questions remain about the short-term fate of Turkey’s steel industry. The sharp devaluation of the lira should provide steelmakers with a major boost in terms of competitiveness, but will also dramatically push up input costs as, without significant domestic suppliers of met coal, scrap or iron ore, Turkey has to import much of its raw material.

In addition, deprived of one of its major markets – the U.S. – Turkish mills will be forced to look elsewhere for sales, a change that will likely entail discounting to maintain sales (at least in the short term).

European and Middle Eastern producers will be watching trade flows carefully to see if tonnage is dumped in their markets, and steel scrap suppliers will be worried about the hit on demand (prices have already started to fall).

Having dropped the twin rocks of sanctions and tariffs into the pond, we shall have to watch how the ripples spread. But with such a sizable buyer and supplier, the impact is going to be way above the level you would expect a country of Turkey’s modest GDP to hit.