The Renewables Monthly Metals Index (MMI) dropped one point this month, falling for a September reading of 104. 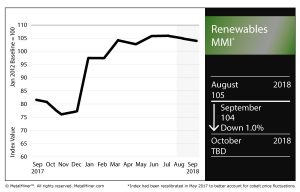 Forms of renewable energy, like wind and solar, have gained momentum in recent years, both in practice and in popular support.

One place that could benefit from a renewable revolution? The Sahara Desert.

According to a BBC report, researchers claim installation of wind turbines and solar panels in the desert there could have the effect of doubling the amount of rainfall it receives, ultimately yielding more plants and life of all kinds.

The researchers published their study in the journal Science.

“In this study, we used a climate model with dynamic vegetation to show that large-scale installations of wind and solar farms covering the Sahara lead to a local temperature increase and more than a twofold precipitation increase, especially in the Sahel, through increased surface friction and reduced albedo,” the study’s abstract states. “The resulting increase in vegetation further enhances precipitation, creating a positive albedo–precipitation–vegetation feedback that contributes ~80% of the precipitation increase for wind farms. This local enhancement is scale dependent and is particular to the Sahara, with small impacts in other deserts.”

The E.U. has opted to lift a restriction on imports of solar panels from China, the South China Morning Post reported.

The 28-member bloc initially imposed duties on the solar panels in 2013, but the European Commission announced it would not extend them. The duties expired at midnight on Sept. 3.

“After considering the needs of both producers and those using or importing solar panels the Commission decided it was in the best interests of the EU as a whole to let the measures lapse,” the European Commission release states. “This decision also takes into account the EU’s new renewable energy targets.”