To be fair, not all shale gas drilling is slowing, but in the Permian Basin, which has seen the most incandescent growth in recent years, according to the Financial Times, growth is slowing markedly, according to Schlumberger, Halliburton and the U.K.’s Weir Group – all majors suppliers to, or active players in, the fracking industry. 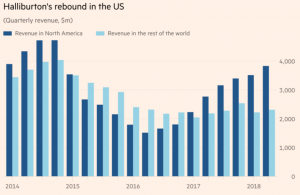 The article cites logistical challenges, including labor costs and a lack of adequate pipeline capacity constraining growth. The article states the following factors have undermined the economics of oil production in the region:

The Financial Times quotes Bill Thomas, chief executive of EOG Resources, who said: “When you’re focused on one basin, one play, it gets very difficult to continue high rates of growth.” 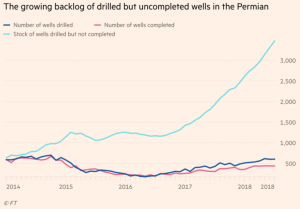 From a low two years ago, the tight oil industry’s rebound has been impressive. Much of it is coming from the Permian Basin, with national production up by 1.5 million barrels a day in the 12 months to July.

But questions are being asked as to whether or not the Permian may be reaching a plateau. New wells drilled alongside older wells are relatively less productive than the original when assessed on the basis of their length and the weight of sand used in the fracking process — so-called “parent” and “child” wells, as the Financial Times calls them.

That would suggest the long-term potential for the region to continue impressive growth at ever-lower cost is called into question.

Whether that proves to be the case remains to be seen. Of course, the Permian is not the only tight oil resource in the country. While others haven’t seen the level of investment the Permian has enjoyed in the last two years, subject to oil prices, the other regions still have huge potential.

What it probably does say is the stellar growth of recent years is unlikely to continue and may be slower from the middle of this year onwards. With the dramatic rise in steel prices following the U.S.’s imposition of a 25% import tariff on steel products, it was to be expected drillers would find both exploratory work and infrastructure investment slowing. However, the Financial Times suggests the slowdown has caught many in the industry by surprise and suppliers’ share prices have taken a hit as a result.