In recent years China’s steel sector — particularly the large, state-owned steel mills — have benefited from the enforced closure of capacity on environmental grounds during the winter heating season.

Contrarian as it may at first sound, closure of private mills largely — on the basis they are unregulated  and are supposedly the most polluting steel mills — was a boost to larger competitors.

About 140 million tons of “illegal” production was closed last year, Reuters reports, only for capacity to be further restricted by Beijing’s war on smog during the winter heating season. The forced closure of steel mills in 26 cities around Beijing and Tianjin hit national output, accordig to the report, contributing to a year-on-year contraction in output during November and December last year.

Demand, however, remained buoyant. As a result, prices rose and exports, the relief valve for excess capacity, fell. 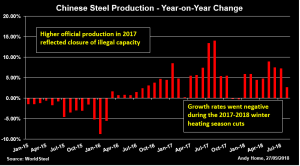 It should be no surprise that steel mills in the rest of the world all benefited from less competition and, as a result, higher prices (long before America’s 25% steel import tariffs lifted prices further). Indeed, cumulatively, strong domestic demand and state meddling on environmental grounds have allowed China’s steel sector to make good money and focus on the buoyant domestic market for the last two years.

That may be about to change.

As the Financial Times points out, in a surprise move Beijing has announced a change of tack this winter, replacing hard caps on steel production and coal use with emissions targets rather than forced closures. Instead, China is putting the decision-making power in the hands of local governments rather than having it centralized in Beijing.

China will not renew significant cuts on steel production and coal use aimed at improving air quality this winter, the Financial Times reports, suggesting the reason is slowing economic growth in the face of the U.S.-China trade war. 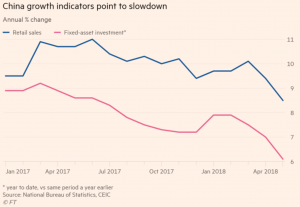 Certainly, there have been signs since last year that growth is slowing, fixed-asset investment — a core driver of Chinese growth that includes spending on new buildings, machinery and infrastructure — grew at its slowest annual pace since at least 1995 through the first five months of this year. Retail sales, an indicator of consumer demand, also increased at their slowest pace since 2003.

Meanwhile the currency has been on a slide relative to a rising dollar. In addition, probably in a bid to to boost lending, Beijing is making moves to increase liquidity by reducing bank reserve ratios. The government is also said to be targeting certain steel-intensive infrastructure projects that could boost consumption (such as city metro systems).

Should the rest of the world care? “Yes” is the answer.

China’s steelmaking capacity may have contracted from 1.15 billion tons in 2015 to 1.05 billion tons by last year, but it would take only a few percentage points of weakening domestic demand to open the floodgates for more exports.

Without the imposed discipline of winter closures, steel mills may be encouraged to keep high run rates as demand softens. With a weaker currency, export prices could be sufficiently competitive to drag down global price levels; that would be good for consumers, but it’s not what mills outside of China will be wanting in 2019.