If you’re in the midwestern U.S., chances are your March has gotten off to a more-frigid-than-normal start. 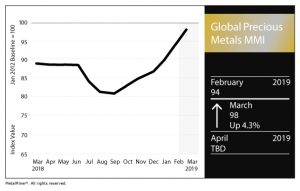 Not so for the Global Precious Monthly Metals Index (MMI), which has gotten even hotter.

The subindex tracking a basket of gold, silver, platinum and palladium prices from four different geographies shot up four more points to hit 98 for the March reading — a 4.3% increase — driven by a still-scorching palladium price that began its second month in a row higher than the gold price.

In fact, the U.S. palladium bar price, as tracked by the MetalMiner IndX, hit $1,522 per ounce on March 1. That level has never been seen in the history of the MMI series, which began in January 2012.

Forget your road salt or other de-icer — just throw some palladium on your slippery sidewalk, it should melt the ice in no time!

All of this is to say that the Global Precious MMI is now in a six-month uptrend.

Meanwhile, the U.S. platinum bar price rose slightly, but not nearly enough to eat into the spread with its sister platinum-group metal (PGM). The U.S. gold price faltered a bit, beginning the month at $1,312 per ounce (about $8 per ounce lower than last month). Silver prices also dropped across the four tracked geographies.

Last month, we reported that the global palladium supply shortage is still the top driver, with a shortfall of more than 1 million ounces this year and next as estimated by researchers Refinitiv GFMS, according to Reuters.

It looks as though Norilsk Nickel is getting on that forecast bandwagon as well.

Norilsk (also known as Nornickel), which produces 40% of the world’s nickel, said “in 2019 the global palladium market deficit is forecast at 800,000 ounces compared with 600,000 ounces in 2018, with consumption up by 500,000 ounces to 11.2 million ounces due to strong demand from autocatalyst producers,” according to a recent Reuters report.

“(The) spot palladium market practically dried out” in 2018, Nornickel is quoted as saying. According to the Reuters report, the company said the “supply tightness was partly eased by the release of stocks from palladium ETFs (exchange-traded funds), which fell below 1 million ounces for the first time since 2009, and from Nornickel’s Global Palladium Fund.”

All of this conspires to keep the platinum-palladium spread wider than ever.