Automotive MMI: Automakers Hope to Bounce Back Down First Quarter

The Automotive Monthly Metals Index (MMI) held flat this month, again coming in for an MMI value of 93. 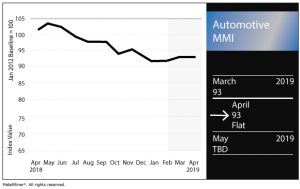 General Motors, which reports sales on a quarterly basis, reported it delivered 665,840 vehicles in the first quarter of 2019, “with a selling mix of trucks, SUVs and crossovers above 80 percent.”

In addition, the company posted its highest first quarter average transaction price in its history.

First-quarter sales, however, were down 7% compared with the first quarter of 2018.

“After a slow start to the year, the retail SAAR has risen each month since January,” said Elaine Buckberg, GM chief economist. “Consumer sentiment continued to recover in March and the other key drivers of auto sales like employment, wage growth and household balance sheets are healthy. The Fed paused in raising interest rates, which eases a headwind facing auto sales. Overall, the U.S. economy is in solid shape, which bodes well for the industry outlook.”

“The industry had a tough first quarter but with spring finally starting to show its face and continued strong economic indicators, such as a boost in housing sales, lower lending rates and a strong labor market, we are confident that new vehicle sales demand will strengthen going forward,” said Reid Bigland, Fiat Chrysler’s head of U.S. sales. “Meanwhile, our Ram brand sales and average transaction prices continue to be strong and our much anticipated, game-changing Jeep Gladiator pickup is on track for its in-market debut this month.”

According to a report by the Associated Press, total U.S. auto sales were down 2% in the first quarter. In other downward indicators, we recently noted U.S. housing starts fell 8.7% in February compared with January. Both of these could plausibly be chalked up to the winter season; it remains to be seen if these and other inauspicious economic indicators portend a slide into a longer-term economic slide, or if they are merely blips on the radar.

As we recently reported, GM announced plans to invest $300 million at its Orion Township, Michigan plant to manufacture a new electric vehicle at the site.

The automaker already manufactures the Chevrolet Bolt at the southeast Michigan plant.

The announcement came five days after President Donald Trump again dished out criticism of the automaker for its plans to idle several U.S. assembly plants.