The Rare Earths Monthly Metals Index (MMI) dropped one point this month down to an MMI reading of 21.
Keep up to date on everything going on in the world of trade and tariffs via MetalMiner’s Trade Resource Center. 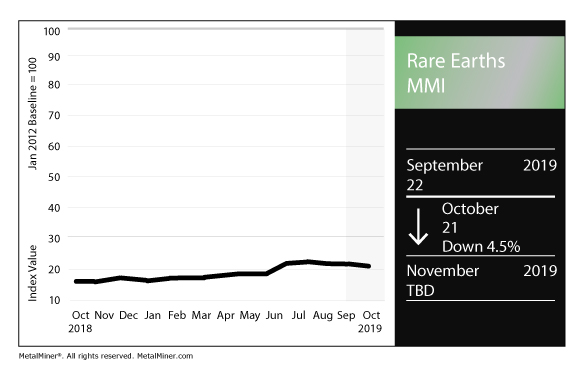 One point of underlying tension between the U.S. and China, as the two countries have waged a bitter trade war over the past year, has been China’s dominance of rare earths.
The materials, crucial for use in a wide variety of high-tech capacities, overwhelmingly come from China.
As such, the U.S., looking to wean itself off dependence on China for said rare earths, is looking to form partnerships elsewhere, as MetalMiner’s Stuart Burns recently explained.
“Many will recall, and not a few lament, the failure to support California’s Mountain Pass mine, source of the country’s rare earth metals, as an example of how exposed the U.S. has become,” Burns explained.
“According to the Defense Visual Information Distribution Service (DFIDS), the U.S. was largely self-sufficient for most of the 20th century, with all of its rare-earth needs being met by the Mountain Pass mine.
“However, following a free trade deal between the U.S. and China in the 1990s, lower labor costs and regulatory requirements meant China could undercut Mountain Pass. Combined with problems over water supply pollution and stricter regulations, Mountain Pass was forced to shut down.”
As such, the U.S. is looking to shore up its rare earths supply chains by forming partnerships elsewhere.
“Now, the U.S. is seeking cooperation from potential supply countries outside of China — notably Australia, but also Greenland, Botswana and Peru,” Burns continued. “The U.S. is looking to develop not just alternative raw material supply but, more importantly, to develop refining facilities, too.
“A new body, the U.S. Development Finance Corporation, is set to play a significant role in facilitating the U.S. government’s efforts to take equity positions in mining projects and encouraging private sector investment, according to Frank Fannon, the U.S. assistant secretary of state for energy resources, according to Reuters.”

Continuing the aforementioned theme, Bloomberg reported late last month that U.S. President Donald Trump and Canadian Prime Minister Justin Trudeau recently discussed efforts to secure supply chains for rare earths.
According to the report, a joint action plan will be presented to the government coalition that forms after the Oct. 21 elections in Canada.
“It is in our interests to ensure that we have reliable supplies of these important minerals for technology, and it’s a conversation that our government is leading on,” Trudeau was quoted as saying at a recent press conference. “Canada has many of the rare earth minerals that are so necessary for modern technologies.”
Also of note, the next round of U.S.-China trade talks are scheduled for later this week.
However, the two countries are already on shaky ground heading into the talks.
Following a tweet by Daryl Morey, general manager of the Houston Rockets NBA franchise, in which he expressed support for anti-government protestors in Hong Kong, Chinese businesses announced they would sever ties with the organization. Chinese broadcast partners Tencent and the state-owned CCTV announced they would no longer broadcast Rockets games, marking yet another point of tension between the two countries.
In addition, the Bureau of Industry and Security announced it would add 28 Chinese organizations to the Entity List for “engaging in or enabling activities contrary to the foreign policy interests of the United States.”
“The U.S. Government and Department of Commerce cannot and will not tolerate the brutal suppression of ethnic minorities within China,” Secretary of Commerce Wilbur Ross said. “This action will ensure that our technologies, fostered in an environment of individual liberty and free enterprise, are not used to repress defenseless minority populations.”
Looking for metal price forecasting and data analysis in one easy-to-use platform? Inquire about MetalMiner Insights today!