The Raw Steels Monthly Metals Index (MMI) took another hit this month, dropping three points to 67. The index has now dropped for seven consecutive months — following an early 2019 high of 82 in March — on the back of falling steel prices. 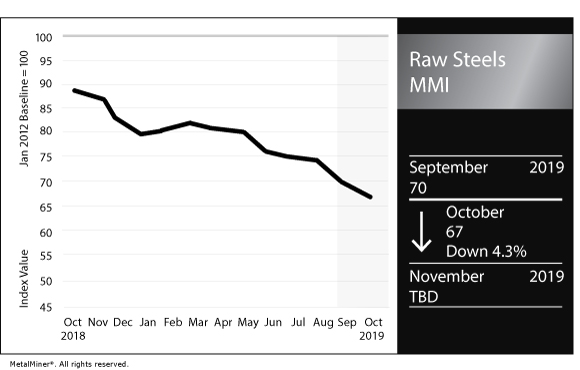 Based on technical analysis, prices for plate could still demonstrate more downside momentum compared to other forms of steel (HRC, CRC and HDG).

U.S. capacity utilization for the year to date remains above the critical 80% mark at 80.4%. During the period, production totaled 74.3 million tons, a 3% increase compared to the same period last year, according to the American Iron and Steel Institute (AISI).

However, weekly data for the week ending Oct. 5 indicated capacity utilization of 78%, with 1.8 million tons produced, a 3.9% decrease compared to the same period last year.

China CRC and plate prices nudged down recently, while HRC prices dropped to a greater extent.

During the course of 2019, Chinese steel prices looked fairly flat overall, with prices now lower than at the start of the year.

China’s total share of global production totaled 53.6%, based on WSA data through August. Based on an estimated 664.04 million tons through August, production increased by 9.4% compared to the same period of 2018.

Meanwhile, production in Japan, the world’s third-largest steel-producing country, fell by 3.7% during the eight-month period, down to 67.589 million tons. The country’s share of global production dropped to 5.5%, compared to 5.9% during the first eight months of 2018.

U.S. production totaled 59.23 million tons through August, an increase of 4% compared to the same period of 2018, according to WSA numbers. Share of global production remained static at 4.8%. Likewise, production in India, the world’s second largest producing country, also remained flat at 6.1%, in terms of total global share of production.

Given that demand from GM represents around 5-9% of annual steel demand in the U.S. (by various estimates), the ongoing strike continues to place a drag on U.S. steel prices.

Global growth in the production of steel appears to remain in excess of growth in steel demand, exerting downward pressure on prices.

Therefore, industrial buying organizations may benefit from understanding exactly when and how much to buy in this falling market.

Buying organizations interested in tracking industrial metals prices with ease should request a demo of the all new MetalMiner Insights platform.