The Automotive Monthly Metals Index (MMI) ticked up one point for an MMI reading of 86. 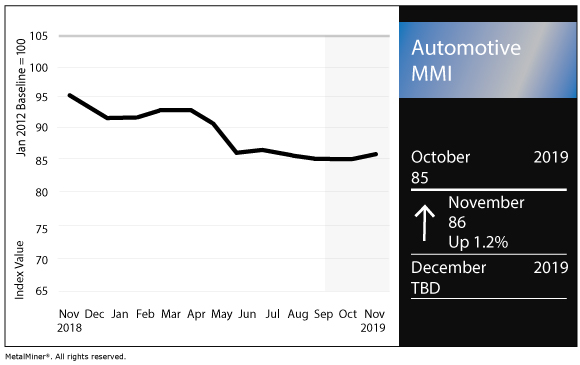 As mentioned in previous reports, the top three automakers in the U.S. — General Motors, Ford and Fiat Chrysler — all now report sales on a quarterly basis.

Toyota Motor North America saw its October sales drop 1.2% on a volume basis and by 4.9% on a daily selling rate basis.

According to a forecast report by J.D. Power and LMC Automotive, new-vehicle retail sales in October were forecast to decline by 0.9% year over year (when adjusted for number of selling days).

GM Strike Comes to an End

After 40 days, the nationwide strike at General Motors finally came to an end.

“The work stoppage in the U.S. negatively affected North American business results in the third quarter and expected results for the year,” GM said in its third-quarter earnings release. “In the third quarter, about two weeks of vehicle production was lost.”

In September, the United Auto Workers union initiated the first nationwide strike at GM since 2007.

On Oct. 25, UAW announced it had ratified a new four-year labor deal.

“General Motors members have spoken,” said Terry Dittes, UAW vice president and director of the UAW-GM department. “We are all so incredibly proud of UAW-GM members who captured the hearts and minds of a nation. Their sacrifice and courageous stand addressed the two-tier wages structure and permanent temporary worker classification that has plagued working class Americans.”

According to UAW, the approved deal included “an economic package of an $11,000 per member signing bonus, performance bonuses, two 3% annual raises and two 4% lump sum payments and holding the line on health care costs.”

According to Fiat Chrysler, the merger would create the world’s fourth-largest OEM by annual unit sales.

“But the FCA has long held that consolidation within the European car industry, if not globally, is inevitable as the industry goes through unprecedented disruption in terms of a switch to electric and competition from Asia.

“There is arguably a better logic to a Peugeot-FCA merger than a Renault-FCA tie-up.”