The Renewables Monthly Metals Index (MMI) dropped one point this month for a December MMI reading of 96. 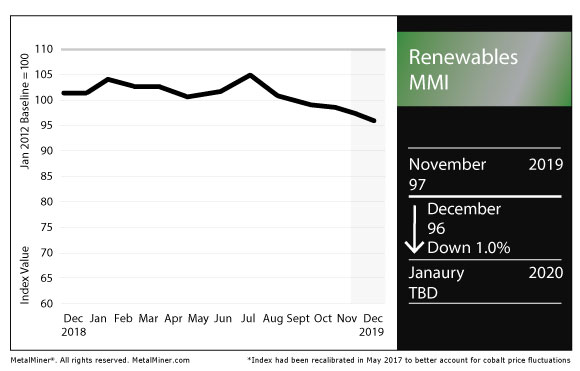 “In signing this contract with the world’s largest producer of cobalt, SK Innovation has secured supply of a metal which is both core to battery production and in short supply,” SK Innovation said in a prepared statement. “SK Innovation stands ready to produce the batteries required to meet the significant anticipated battery demand.

“The electric vehicle (EV) battery market is growing fast and the total market size will be c.US$150bn in 2025, larger than the semiconductor market. Accordingly, cobalt demand will keep increasing. We assume global cobalt demand for EV batteries will be 32kt in 2020 and 92kt in 2025. With this contract, SK Innovation can produce batteries for 3 million EVs.”

Reuters recently reported the government of Madagascar has drafted a law calling for the increase of mining royalties for nickel and cobalt, bringing the rate up to 4% from 2%.

According to the report, the proposed law also calls for allowing the government to take an at least 20% stake in any mining production in the country.

Neodymium potentially down the road for Lynas venture

As we noted in out Rare Earths MMI report, Australian miner and processor Lynas Corp. earlier this year signed an MOU with a Texas-based firm to build a rare earths separation facility in the U.S.

The company said the plant would initially focus on heavy rare earths, like dysprosium and terbium.

However, the company added it could incorporate separation of light rare earths, like neodymium, at a later date.

The GOES MMI, which tracks grain-oriented electrical steel, took a fall this month. 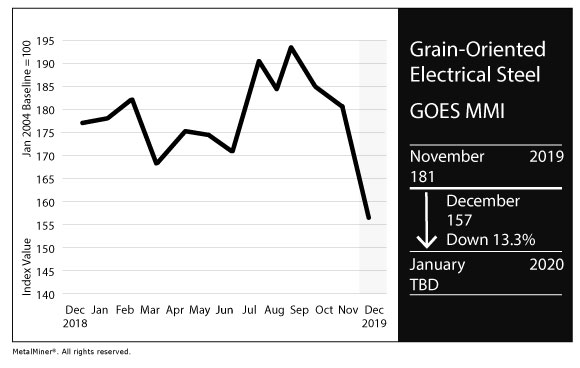 In other GOES news, the lone U.S. producer of electrical steel, AK Steel, is being acquired by Cleveland-Cliffs, as MetalMiner’s Lisa Reisman explained last week.

Among other efforts, the German firm continues to work toward an eventual IPO for its elevator segment.

“The preparations are timed in such a way that thyssenkrupp is expected to be able to make a sound decision in the first quarter of 2020 on which options to pursue primarily,” the company said. “Internal preparations for an IPO will be completed by the end of the year. thyssenkrupp has already received indicative offers from strategic and financial investors. Based on a due diligence, thyssenkrupp expects binding offers as a basis for potential negotiations in the next year.”

U.S. steel plate fell 9.9% to $616/st. As we have noted previously, plate often does not follow the same trend as other forms of steel. For example, HRC, CRC and HDG prices have been on the rise over the last month, but plate has not joined in the upward momentum.